No-deal bill a ‘chink of light for business’ 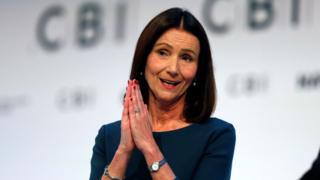 Progress in passing a bill to stop a no-deal Brexit in parliament has been a “chink of light” for UK business, according to the head of Confederation of British Industry (CBI).

However, Carolyn Fairbairn told the BBC the “cloud has not gone away” for companies until a deal is agreed.

She said many would have to keep stockpiling, even though the bill is likely to be ready for royal assent on Monday.

“The clock is still ticking,” she said.

On Thursday, the government confirmed the bill – designed to force the prime minister to seek an extension to the 31 October Brexit deadline – would complete its passage through the Lords on Friday.

The proposed legislation was passed by MPs on Wednesday, inflicting a defeat on Prime Minister Boris Johnson.

However, the government – which wants the UK to leave the EU on 31 October with or without a deal – is seeking support for an election on 15 October.

As a result, Ms Fairbairn said, many business would continue to prepare for a potential no-deal.

“So many businesses are stockpiling for 31 October in the same way they did for 29 March at enormous cost and expense,” she said.

“It’s so wasteful and I think they will have to continue to do that until they know otherwise.

“And I think more and more are deeply concerned about the long-term effect on their competitiveness; they are seeing a loss of market share internationally that is very hard to claw back.”

The CBI has previously said leaving the EU with a deal is essential to protect the economy and jobs.

And it has said that, despite spending billions on preparing for no deal, many businesses are not ready for the shock it might cause.

A survey from manufacturing lobby group Make UK and the auditors BDO came to a similar conclusion. It found UK firms were less prepared for no deal than in March, while Brexit uncertainty was dragging on demand.

Despite this, Ms Fairbairn said few CBI members viewed the prospect of a Labour government following a potential October election as much better than no deal, citing concerns over Jeremy Corbyn’s plans to renationalise industries and hand company shares to workers.

“I think this is a choice no business wants to have to make. In terms of the policies of a Corbyn government, some of them are deeply damaging.”

Some politicians have argued that warnings about the potential damage of a no-deal Brexit have been exaggerated.

Prior to becoming Leader of the House of Commons, Jacob Rees-Mogg said in July that quitting the bloc without a deal could result in an £80bn boost for the economy.