Norfolk and Suffolk greenhouse plan ‘will provide 10% of UK tomatoes’ 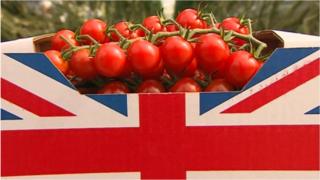 The two new greenhouses will supply 10% of Britain’s tomatoes

Two giant greenhouses costing £120m are to be built next to sewage works to grow millions of tomatoes and bring 360 agricultural jobs.

Work on the greenhouses – the UK’s largest – has already begun at Trowse, near Norwich, and Ingham, Suffolk.

Heat to create an ideal growing temperature will be pumped into the greenhouses from the sewage works.

New Anglia Local Enterprise Partnership (LEP) said they would provide an economic “shot in the arm”.

Britain consumes 500 million tonnes of tomatoes a year but only 20% are home-grown.

Investment firm Greencoat Capital said the two greenhouses, covering 29 hectares (72 acres) in total, would account for another 10% of requirements.

“This is a huge opportunity for us to become more self-sufficient in tomatoes,” he said.

“Norfolk and Suffolk are already leading agricultural production areas… and this is a real shot in the arm for the local economy and testament to the skills we have here.”

Using heat from from nearby Anglian Water treatment plants would cut carbon emissions associated with growing the crop by 75%, the investment firm said.

Scheduled for completion in autumn 2020, the projects would create 360 permanent jobs and 120 seasonal roles, the firm added.