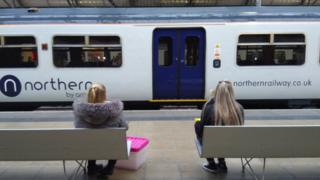 Northern said issues with services were unrelated to the new timetable

Rail commuters in the north of England have been hit by cancellations and delays as new winter timetables were launched.

Northern had cancelled 19 trains by 10:00 GMT and 31 were delayed, which it said was down to “operational issues” rather than the timetable change.

The Transpennine Express services hit included those linking Manchester Airport with Edinburgh and Newcastle, and trains from Liverpool Lime Street to Scarborough.

On twitter, its customer service account @TPEassist wrote: “We’re sorry if your service is affected today. The timetable changed yesterday and there are some challenges across the network.”

Northern services which were affected were between Blackpool North and Manchester Airport, from Leeds to York and Sheffield, and Darlington to Saltburn.

A spokesperson for the rail firm said: “Very few of our services have seen any changes as a result of the timetable coming in.

“The small number of delays and cancellations are due to operational issues including driver sickness, signalling failure and train faults.”

Greater Manchester Mayor Andy Burnham said rail issues had “gone on far too long” and called for Northern to be stripped of its franchise.

“If the government is serious about supporting the north, then it needs to show it by acting this week to sort out our failing rail services,” he said.

“As a first step, it should strip Northern of its franchise. That would send a clear signal to all rail operators – notably Transpennine Express – that we will not accept a second-class rail service for people in the North.

“If Transpennine Express fail to respond to that message, they should be next.”

Many services were cancelled and delayed around the north of England

The National Rail timetable is changed in May and December each year.

In the west of England, passengers using Great Western Railway (GWR) services were also hit with cancellations and delays between Reading and London Paddington, due to a fault with the signalling system at Maidenhead.

A new, super-fast GWR service from Bristol to London, due to leave at 08:53 GMT, was among the cancellations.

Northern had said the new timetable would see 50 new trains being introduced across its services.

In October, fewer than half of Northern rail services ran on time, the firm’s figures showed.

Cancellations were also at their highest level since July and August.

The operator had said the changes in its new winter timetable would focus on “reliability and stability” and add to the services each week.

Commuters shared train travel issues on social media on Monday, as the hastag #northernfail was trending.

Keri Lewis Brown shared an image of a departures board which read a service to Blackpool North had been cancelled “due to a train stopping in the wrong position”.

Ben Simmonds wrote on Facebook: “So Northern have gone ahead and cancelled the 7:53 from Sowerby Bridge to York in the new timetable (despite promising not to) which means the 7:58 to Leeds will now have triple the normal passenger count. Why in God’s name would you cancel a peak commuter train?!?!”

Transpennine is running a pre-planned temporary reduced timetable on some routes as a maintenance backlog and infrastructure problems have delayed staff training on new trains.

Sophie Lichfield tweeted that commuting between Liverpool and Manchester was “near impossible” due to the cancellations and delays.

While another, Pippa Jackson, tweeted: “8.17 to Dewsbury cancelled. Having to wait nearly an hour for the next one. No lunch for me today then. Or I don’t get home till 7pm. And I see my kids for an hour before they go to bed. Truly shambolic service @TPExpressTrains.”

One passenger, posting on Twitter with the username leylandski, wrote: “Every day you get worse. Now you’ve cancelled both my train to and from work until Jan? Why? They were during peak time, this is totally unacceptable.”

Anthony Smith, chief executive of watchdog Transport Focus, said: “Passengers don’t care what causes the disruption – they just want things running again as soon as possible, and plenty of visible staff on hand to help them in the meantime.

“Train operators should ensure every eligible passenger knows how to claim compensation so that they get the money they are entitled to.”