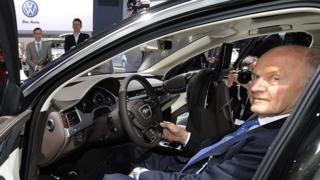 April 2010: Ferdinand Piëch in an Audi in Hamburg

Mr Piëch took charge of VW in 1993 at a time when the carmaker, based in the north German city of Wolfsburg, was making heavy losses.

Mr Piëch had made his name as a sports car engineer at Porsche. He oversaw the design of the race-winning Porsche 917.

The iconic Porsche 917 took motor racing by storm in 1970

Mr Piëch collapsed in a restaurant on Sunday and died soon after. He was 82, and the father of 13 children by four women.

His widow Ursula Piëch paid tribute to his engineering talent, saying: “Ferdinand’s life was shaped by his passion for cars and for the workers who created them.

“To the very end he was an enthusiastic engineer and car lover.”

Ursula and Ferdinand Piëch in 2012

More on VW and the car industry:

His rigorous attention to quality was accompanied by a tough management style described by some as “autocratic”.

He was known for the “steely stare” of his blue eyes and his brusque, no-nonsense speech.

Under his leadership, VW expanded to become the chief international competitor to Toyota.

Cars in the family

His mother Louise was the daughter of Ferdinand Porsche, who had invented the VW Beetle and launched the luxury Porsche brand.

His father Anton Piëch was an Austrian Nazi and ran the VW Wolfsburg plant during World War Two.

In later life, Ferdinand Piëch spoke about the “hardening” formative experience he had as a youth at a Swiss boarding school in Engadine. He had been sent there after getting mediocre grades in Austria.

That “dark” period, he said, taught him to be self-reliant, “because you can’t rely on people”.

He went on to study engineering in Zurich, got a degree for a project on Formula One engines, and joined Porsche in 1973.

He hoped to become Porsche’s chief executive, but Porsche family members blocked him. During one row with them, German news website Spiegel reports, he shouted: “I’m a wild boar, but you are the domestic pigs!”

It was apparently his way of saying: “I can look after myself, but you need looking after.”

His next move was to Audi, where he oversaw a branding transformation. Audis were widely seen as solid but unremarkable; however, under his leadership, they became high-performance, luxury cars, an example being the four-wheel-drive Quattro, launched in 1980.

From 1993 Mr Piëch worked his engineering magic at VW, boosting the range from four marques to 13.

But the VW makeover involved tough cost-cutting: some senior managers were sacked and staff were put on a shortened working week.

Mr Piëch was praised for a key innovation: a modular system which gave the same technical features to several models. It was called the “platform strategy”.

But there were a few flops too, such as the VW Phaeton.

During his nine years as CEO, he oversaw VW’s expansion to bring other top brands under one roof: Audi, Seat, Skoda, Lamborghini, Porsche and Bentley all became part of the VW empire.

He was VW chairman in 2002-2015 but finally fell out with his long-time protege Martin Winterkorn.

It was a timely departure, because months later the emissions cheating scandal erupted. VW was found to have tampered with technology to fool US exhaust emissions regulators. The “dieselgate” scandal has cost VW about $30bn so far.

The Porsche and Piëch families still run the Porsche car firm, which has a 52.2% voting stake in VW.