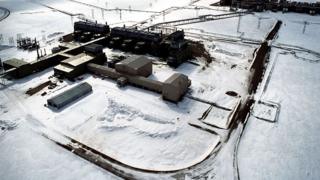 BP will no longer have any operations in Alaska after it agreed to sell its entire remaining business there to a private oil and gas firm.

The firm has faced pressure from environmental groups to stop drilling in the area, but BP said its decision was not connected to this.

“We have other opportunities that are more closely aligned with our long-term strategy,” BP’s chief executive said.

BP said the deal is part of its plans to raise $10bn over the next two years through asset sales to further strengthen its balance sheet.

The extreme cold and remoteness of some of the drilling regions of Alaska makes it expensive for firms to operate there.

BP’s chief executive Bob Dudley said Hilcorp had the ability to “maximise its [the business’s] value for the State of Alaska.”

Mr Dudley said the funds from the sale would enable BP to “pursue new advantaged opportunities.”

The Prudhoe Bay oilfield in the state – in which BP has a 26% stake – is the most prolific oil field in US history, and has produced over 13 billion barrels of oil, with forecasts suggesting it has the potential to produce more than one billion further barrels.

BP said about 1,600 employees were currently associated with its Alaskan business. It said it was “committed to providing clarity about their future as soon as possible as part of the transition process with Hilcorp.”

Mr Dudley said the decision to sell its Alaskan business did not diminish its commitment to drilling in the US. “We remain very bullish on the US energy sector… and we will continue to look at further investment opportunities here,” he said.