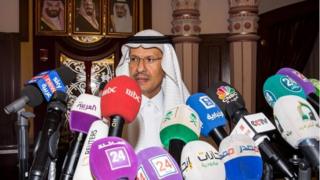 Saudi Arabia has said its oil output will return to normal by the end of this month, with half the production lost in drone attacks on two key facilities already restored.

The news immediately calmed the oil markets, with the price falling 7% on Tuesday after Monday’s huge spike.

Also, President Donald Trump said it was no longer necessary to release reserves from US emergency stocks.

“Production will be back to normal by the end of September,” Saudi Energy Minister Prince Abdulaziz bin Salman told a press conference, adding that the state oil giant Aramco had emerged “like a phoenix from the ashes” after the attack. A Saudi official also said plans for the stock market listing of Aramco, would continue “as is”.

The drone attacks on plants in the heartland of Saudi Arabia’s oil industry hit the world’s biggest petroleum-processing facility as well as a nearby oilfield, both of which are operated by Aramco, which is being prepared for what is expected to be the world’s biggest share market listing.

Aramco chief executive Amin Nasser said the company was still in the process of estimating repair work, but it was “not that significant” given the company’s size. Aramco had put out 10 fires in the span of seven hours after the “huge” assault, he told the same news conference.

The two Saudi facilities account for about 50% of the country’s oil output, or 5% of daily global oil production.

The US has blamed the attacks on Iran, and had said it could release more of its strategic reserves on the market to restore calm to prices. The US has about 416 million barrels of oil in commercial storage held by the likes of oil producers and refineries, based on data from the US Energy Information Administration.