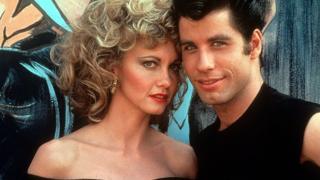 Despite the hefty price tag, the bidder decided the outfit was the one that they wanted

The black leather jacket and skin-tight trousers that Olivia Newton-John wore for the finale of Grease have fetched $405,700 (£314,000) at auction – more than double the expected bid.

The actress’ original script from the film was also among the items at the sale in Beverly Hills, California, which in total raised $2.4m.

Some of the proceeds will go towards Newton John’s cancer treatment centre in Australia.

The buyers’ identities are not public.

The infamous black outfit marked Sandy’s transition from a good girl high-schooler to a sexy, leather-clad biker chick, when the couple sang You’re the One That I Want in a fairground.

The original trousers were made in the 1950’s

The leather trousers were already two decades old when she wore them and had a broken zip that meant Newton-John had to be sewn into them.

She said that “limited” what she could eat and drink while filming, adding “those were long days”.

The pink gown she wore to the film’s premiere sold for $18,750, Julien’s Auctions confirmed – three times the estimate.

Newton-John has asked buyers to send her photos of themselves with the items along with a personal note.

She said selling a large amount of her possessions was a “simplification of my life”.

She was previously diagnosed with the disease in 1992 and 2013 and has opened up about using medicinal marijuana along with other natural remedies for the disease.

Media captionOlivia Newton-John: “I’m not going to be a victim”