Pay rise plans: Is minimum wage enough to live on? 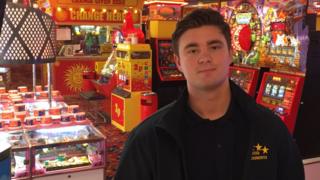 John Remblance says the business has to adapt to staffing costs

Money is everywhere in the amusement arcades on Southend’s seafront: being fed into slot machines, paid out in jackpots, or hanging over the edge of penny fall games.

When running a business like this, the money that really matters is staff wages. Pay is the dominant cost and, with a host of employees on the minimum wage, it is a bill that has been rising.

“There has been quite a dramatic increase [in the minimum wage] in recent years. At peak times, we can absorb the costs but it stretches us even thinner for the rest of the time,” says John Remblance, manager at Star Amusements.

“The hard season is getting even harder.”

The arcades run by this family firm are open every day except Christmas Day. Further rises in the minimum or National Living Wage promised by all the major political parties could make this a more expensive and therefore more seasonal business, he says.

When the tourists and day-trippers leave, they may need to close their doors.

While those on the lowest pay have seen increases, managers’ wages have stayed the same. There is a danger, Mr Remblance says, that a narrowing gap dims ambition. There may not be the incentive in the pay packet to take on extra responsibility and extra work.

At 25, workers of his age see the minimum wage of £7.70 an hour become the National Living Wage of £8.21 an hour. The extra cost has meant a change of policy by the business. When once they would have only employed slightly older workers, with the experience to cope with the anti-social behaviour they encounter, now they take on younger staff too.

One of those is Amber Scraggs, a 21-year-old working in the cashier booth giving change to customers. She works for 46 hours a week on the minimum wage.

It can be a tough job, she says. Not everyone is as friendly as the stray cat that wanders in most evenings, circling the arcade games and roulette machines. The financial rewards also leave her with worries.

“The minimum wage isn’t enough to be able to live by myself,” she says. She shares the domestic bills with her partner.

“And it is too expensive to live in Southend in the long term. [Housing] developments are for people living here but working in London.”

One in five of the town’s working population commute into London, so the average salary among Southend residents is £144 higher than it is for those who actually work in the town, according to the Centre for Cities think tank. That is quite a difference for people such as Miss Scraggs.

The think tank, which focuses on the economic performance of UK cities, said that last year, at £413 per week, average pay in Southend was just over half that in London and the lowest of the UK towns and cities it analysed.

Further down the strip, Rebecca Constantinou has been employing young staff at her family-run cafe for the past 23 years. She pays just above the minimum wage, but a higher rate is likely to mean a bigger wage bill.

She is never short of applicants, she says, but with higher pay will come greater responsibility.

“If there is a massive jump [in pay] we are all going to have to be more professional, there will be more competition for jobs, so they will need to work a bit harder,” she says.

That is reflected in a report by the Low Pay Commission, which advises governments on minimum wage rates. It says that rising statutory minimum pay must be supported by economic conditions.

Raising the minimum wage too fast in tough economic times could lead to problems, it argues. Greater productivity from workers is needed to support rising pay.

The commission also points out that simply increasing the amount paid per hour to workers does not automatically end low pay. Why? Because they might not work enough hours in the week.

To illustrate its point, it says there are 4.7 million workers aged 21 and over in the UK who are deemed to be low-paid based on their hourly rate, just under 18% of the workforce. However, when looking at total weekly income instead, this figure rises to 7.2 million individuals, or over 27% of the workforce.

A greater proportion of part-time workers than those working full-time are on the National Living Wage (the minimum wage for those aged 25 and over). More women than men are on the statutory minimum. All of this means more attention needs to be paid to the relationship between pay and in-work benefits.

All the major political parties have pledged further rises in minimum wage levels.

For example, Labour has said it wants a £10 hourly rate for workers aged 16 and over to be the statutory minimum. The Conservatives say the National Living Wage should increase to two-thirds of median income – the equivalent of nearly £10.50 an hour – within five years, and be paid to those aged 21 and over.

The SNP has called for the end of the age restrictions for the National Living Wage.

An increasing number of businesses are paying the so-called “real living wage”, which is a higher, voluntary threshold and is separate from the statutory minimum.

An independent report, commissioned by then-chancellor Philip Hammond earlier this year but recently published, says there has been little or no evidence of job losses as a result of rising minimum wage levels.

Prof Arindrajit Dube, an academic in the US and an expert on the subject, said there was “room for exploring a more ambitious National Living Wage” in the UK in the coming years.

Plans would make it one of the most generous in the world, but Prof Dube stressed that – owing to relatively little evidence being available – the Low Pay Commission should be able to review the effect on jobs as pay increased.

Back in Southend, while money topples out of one of the arcade machines, manager Mr Remblance stresses that he wants to keep his amusement arcade open all year round.

“It encourages loyalty from staff,” he says. However, he knows that how much he pays them will not be entirely in his hands, but will depend – in part – on the UK’s short-term political future.