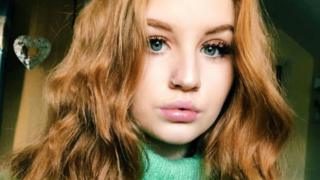 “I was sitting with the girls talking about buying our first houses and how we would manage.

“I wasn’t too worried, because my credit score was quite good. The next time I checked, it had nearly halved,” Erin Phillips says.

The 21-year-old student prides herself on being organised, with monthly payments set up to pay off credit card bills and her car automatically.

But, she often used Klarna, a buy now pay later firm, to buy clothes online, try them on, and pay 30 days later.

She missed a few payments – not realising that it could affect her credit score, which banks and credit card companies use to decide whether or not to lend to people.

Klarna offers different ways to pay, including a deadline of up to 30 days or making three equal monthly instalments.

It says that it does a “soft” credit check, which doesn’t affect credit scores, for both options, to ensure customers have the ability to repay.

Klarna sent her a letter when her payments were overdue: “All they say is you’ve missed a payment, and you have one extra week. There’s not much information in them really.

“I was quite naive, and I didn’t think these little purchases would affect me so much, usually between £20 and £80. If I had known, I would have just used my credit card.”

Debt charities are calling on buy now pay later firms to be better at explaining risks to customers’ finances in their adverts.

Stepchange, the Money Advice Trust, the Debt Support Trust and Christians Against Poverty told the BBC that companies need to make terms clearer at the outset.

Klarna’s most popular product is called “Pay later”. Customers have 14 or 30 days to pay off shopping they’ve bought online, with no added interest.

Unpaid bills are marked on a shopper’s credit score, and can be passed to a debt collection agency. These details were not included in the Swedish company’s recent advertising campaign.

But, it says that all terms and conditions are displayed on its website and at the online checkouts of its 4,500 retail partners, including Asos, H&M and Topshop. It also told the BBC no complaints had ever been upheld about its ads.

New Zealand firm Laybuy launched in the UK in early 2019, followed by Clearpay in June. Clearpay is owned by Australian-based company Afterpay Touch and says it already has more than 200,000 customers.

It has partnered up with retailer Marks and Spencer to offer the option of paying for orders of more than £30 in four instalments.

Late fees can be charged if shoppers miss payment deadlines, but this is not mentioned in its online adverts. Late payments to Clearpay can also be added to credit records.

Clearpay pointed out that it caps late fees at £36 or 25% of the order value (whichever is lowest), and that it has not received any complaints about its adverts.

The Financial Conduct Authority (FCA) sets and enforces rules for financial companies which it authorises. Its guidelines say that adverts should:

“Firms have a duty to ensure that their promotions are clear, fair and not misleading, and failure to do so could fall under the regulator’s gaze,” said Gareth Shaw, head of money at consumer group Which?.

“Buy now pay later firms have become increasingly popular in recent years, especially among young people who may not hold other forms of credit.”

They will require companies to tell consumers when a 0% interest offer expires, and stop them from backdating interest charges on money that has been repaid during such an offer period.

Instagram influencers and Love Island contestants are often tagged in posts by these firms.

There are concerns young people might be encouraged to take on debt just to afford some new make-up, or a dress for a night out.

Under-25s made up 14% of those seeking help from the charity Stepchange in 2018, with an average outstanding debt of more than £6,000.

“The whole point of retailers signing up with Klarna or companies like this is that people buy more. And some of those people probably shouldn’t be buying more,” says Sarah Pennells, editor of the consumer finance website Savvy Woman.

Clearpay’s website, for example, suggests that its retail partners see an increase of 20 to 30% in the value of the average online order.

Ms Pennells says the key thing to keep in mind is affordability.

“The psychology of the impulse purchase is very strong, but I bet most of us have things in our wardrobe we bought on the spur of the moment, but never wear,” she says.

“If you’re thinking of using buy now, pay later, ask yourself if you’d still buy the item if you didn’t have this option.”

If you’re worried about debt, Citizens Advice has specialist money advisers, while other organisations that can help include StepChange, Christians Against Poverty, Debt Advice Foundation, National Debtline and Shelter.

Have you used ‘buy now pay later’ firms? You can share your experience by emailing haveyoursay@bbc.co.uk.