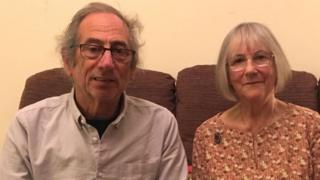 Peter Teich and Ms Becko say they felt ‘numb’ after almost losing £193,000 worth of inheritance

A pensioner has been forced to take legal action after a bank withheld his £193,000 inheritance.

Peter Teich, 74, from Cambridge gave his solicitor the wrong sort code and the money was mistakenly transferred to another Barclays customers account, who refused to return it.

He expected to receive the money in April after his father’s death.

But he realised there was an issue when his sister received her inheritance and he did not.

Mr Teich says his solicitor immediately contacted Barclays and was told it would take a week for the money to be returned.

In May, Barclays wrote to Mr Teich saying he had been “mis-advised” about the funds being restored – and credited his account with a “small token gesture” of £25.

“I freely acknowledge my mistake in this unhappy saga,” said Mr Teich.

“I provided the sort code of the wrong Barclays branch. But my error fades into near insignificance when considered in the context of Barclays’ conduct.”

He said he had given his correct name, address and Barclays account number in Cambridge to his solicitor, but the last two digits of his sort code were incorrect.

He decided to seek legal advice and in June, after spending £12,000 in legal and court fees, he managed to obtain the other Barclays customer’s name.

But costs continued to rack up with Mr Teich spending £34,000 for a court injunction to force the other Barclays customer to pay.

In July the inheritance was finally paid into his account.

His wife, Veronica Becko, 75, told the Press Association: “We just felt numb. It didn’t seem possible or right that a big bank like Barclays could not sort this out. It was an obvious mistake.

When Mr Teich asked the bank to repay the £46,000 he had spent in legal fees, he claims Barclays refused.

Ms Becko said it was only after they contacted the Guardian newspaper that the bank agreed to pay the fees and offer a further £750 for their inconvenience.

“Barclays has done the right thing, finally, although through a rather long-winded way,” Ms Becko said.

“We hope our story will help other people who find themselves in a similar situation.”

In a statement, Barclays said: “It is evident that on this occasion we have failed to meet the high standards that Mr Teich can expect to receive from Barclays, and for this we have offered our sincere apologies.

“After taking a closer look at this situation, we can confirm that Mr Teich can expect the fees he has incurred to be refunded in full with interest, together with a payment for the distress and inconvenience this matter has caused.”

At present, anyone wanting to transfer money enters the intended recipient’s name, account number and sort code. However, the name is not checked.

Under plans from the UK’s payments operator, from next spring the sender will be alerted if the name does not match the account. The change was originally set to begin in summer 2019, but was delayed.