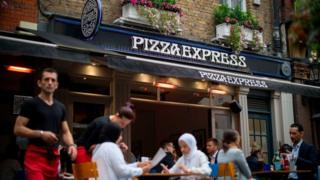 “It feels good to be kneaded,” Pizza Express quipped on Twitter after worries it could go under prompted an outpouring of affection from diners.

In a quick piece of savvy marketing, the chain told customers: “We’re still making dough”, trying to reassure the legions of parents and savvy, voucher-wielding customers who had expressed concern that another family-friendly, mid-priced restaurant chain could disappear from the High Street.

Pizza Express was responding to reports it had hired advisers to negotiate with lenders over a £1.1bn debt pile.

The news saw the almost 55-year-old pizza chain become the latest High Street eatery to have its money troubles splashed across the financial pages.

But what separates Pizza Express from the likes of Jamie’s Italian, which went under in May, and Carluccio’s and Prezzo, which have both closed dozens of restaurants, is its customers’ response to news of the financial troubles.

Some Twitter users called for the restaurant chain to be nationalised, while others encouraged people to pay full price for their pizza, rather than use the discount vouchers that have become a centrepiece of the firm’s business model.

People who aren’t bothered about Pizza Express folding have never been in a town they don’t know, at 3pm, with two screaming, hungry kids & a headache…

Pizza Express won a place in UK diners’ hearts by managing to appeal to both adults and children. Its low lighting, tall stemmed glasses, and wine bar vibe happily coexist alongside kids’ meals and colouring pencils.

But more recently, it has gained popularity for its special offers, which are nearly always available.

Danny Shaw, a footwear branding consultant, wrote on LinkedIn, that this approach is backfiring.

“Pizza Express really isn’t fashionable any more.” Now, he says, “it’s all about discount codes”, and that means “it doesn’t feel special”.

Retail expert Kate Hardcastle agrees that the restaurant chain’s relentless focus on discount vouchers and other special offers has “devalued and eroded” the once-strong brand.

On top of that, she accuses Pizza Express of cannibalising its own market by selling its pizzas through supermarkets.

Because “there’s nothing very special” about the chain’s restaurants, Ms Hardcastle thinks, people may choose to pay less and eat its pizzas at home.

‘Nothing right with it’

She says Pizza Express falls squarely into the “middle market” category of chains that have failed to differentiate themselves from their competitors.

Nevertheless, the chain does appear to hold a special place in the hearts of many.

Partly, that’s because of its heritage – which stretches back over half a century.

A brief history of Pizza Express

1965: Pizza Express founder, the late Peter Boizot, brought a pizza oven from Napoli and a chef from Sicily to open his first restaurant in London’s Soho.

1992: Mr Boizot grew his empire over the following almost-three decades before selling it for £15m to Hugh Osmond and Luke Johnson, the man who was – until recently – chairman of Patisserie Valerie. They floated it on the stock market the next year and ultimately sold out in 1997 when it was worth £150m.

2003: It was taken private again in a £278m deal by two private equity firms who then floated it two years later – although it lasted less than a year on the public markets before it was returned to private equity hands.

2014: It changed hands again, this time to be acquired for £900m by its current owner, Chinese private equity house Hony Capital.

Analyst Peter Backman thinks the brand evokes a nostalgia in people whose parents and grandparents ate at Pizza Express restaurants. They may also have childhood memories of eating at the chain’s family-friendly restaurants themselves.

“My family and I would personally miss pizza express,” says Jayne Golden, who works for a bank.

Her five-year-old son was diagnosed with coeliac disease last year and she likes that the chain caters for him.

“Being able to eat there – safe in the knowledge his food is prepared in the way it should – has been a blessing to us when others restaurants have let us down,” she says.

But Pizza Express is operating in a difficult environment.

Mr Backman says there is too much competition from other High Street chains.

“There are now too many restaurants chasing not enough business so each restaurant suffers,” he says, blaming the economic uncertainty around Brexit for putting people off buying meals out.

He says the chain, which depends heavily on EU workers to staff its restaurants, has also struggled to hire since the referendum in 2016, which has driven up its wage bill. On top of that, Pizza Express has been hit by a hike in rates and the weak pound has made it more expensive to import ingredients.

But the firm’s biggest challenge, appears to be its debt.

The interest on that £1.1bn is costing the company £93m a year, which wiped out all its operating profit last year.

In fact, the debt payments have pushed Pizza Express into the red for the last two years with a loss of £55m last year alone.

‘It may not be the sexiest’

But Mr Backman thinks Pizza Express has something going for it, which many of its younger rivals – like Franco Manca and Pizza Pilgrims – do not.

“People will argue that it’s the discounts that are pulling the people in but I’m not 100% convinced,” he explains.

“It may not be the sexiest or the most modern,” he says. But, he argues: “There is a lot of goodwill towards Pizza Express.”