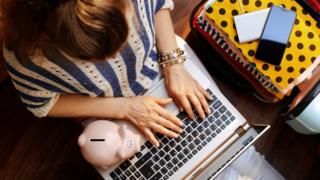 Plum helps people to save money automatically by analysing their bank transactions to find spare cash.

The firm did not say how many had been affected by the delays, which it blamed on a technical glitch.

The boss of the company – which was founded in 2016 and has about 650,000 active users – apologised for the disruption.

“All users should receive their delayed withdrawals by the end of this week at the very latest,” Plum’s founder Victor Trokoudes told the BBC.

Plum uses artificial intelligence to analyse users’ transactions and calculate an affordable amount for them to save. It then puts this money to one side in an account.

The app claims on its website that users are able to withdraw their money at any time. However, many have complained of being unable to access their cash for days, and some are still waiting.

There have also been complaints about the firm’s customer service. The start-up uses chatbots – software that simulates humans – to answer customer queries and some users have complained of waiting more than 24 hours before getting through to a human assistant.

One user, James Donnelly, said on the Trust Pilot review website: “Been trying to withdraw my money for four days. No response to emails. Impossible to chat to a human.”

Claire Stupple, who also uses Plum, told the BBC: “I cannot close my account, because I still have pending transactions but I am just thankful that I’ve only entrusted them with £19.47. Some people I’ve seen on Facebook have all their Christmas savings with Plum.

“I know £19.47 is small change to some people, but I can’t afford to lose even that much, especially this close to Christmas.”

She said the customer service team had not responded to her for more than a week.

Plum has told the BBC it plans to increase its customer service team by 50% immediately to improve response times.

Mr Trokoudes said: “We’re aware that some of our users have had issues withdrawing their money in the past few days.

“This is due to our recent migration to a new e-money partner, which we have been working on for the past few months.

“All our users’ money was safe during this time, but we understand that not being able to withdraw quickly is not a good position for many of our users to be in.”