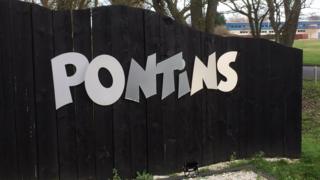 Pontins in Pakefield has become an adult only holiday park

A holiday park has been accused of “pushing families out” after it decided to ban children from one of its sites.

Pontins in Pakefield, Suffolk, has “always been a family centre” but for 2020 it said it has become an adult-only destination.

Holidaymakers from around the country said they were “disappointed” and a petition called “Pontins Pakefield against families” has been set up.

The company has six sites across the UK. Sandy Bay Holiday Village in Kewstoke, Somerset, is also an adult-only site.

On the Pontins website, it said the Pakefield site was “exclusively adult only” for 2020.

Mary Daley, whose husband Paul set up the petition, said her family had been holidaying there since their daughter, who is now 12, was a baby.

She said it was “disappointing they are pushing families out”.

Holidaymakers said Pontins Pakefield had lots of activities for children

Mrs Daley, from Ipswich, said: “We would go once or twice and year and there were lots of activities for children, there was always that family appeal.”

Donna Robinson, from Aldershot, Hampshire, said she was “very surprised” and “really disappointed” to hear the park was no longer allowing children.

She said she took her family there during the summer and they were “impressed”.

Michelle Howland, from Lancashire, said she and her children were “really sad they won’t be able to go back”.

Graham Henry, who worked at the complex for more than 40 years, said it had become a Pontins site in the mid 1950s and had “always been a family centre”.

But, he said, becoming an adult-only park was “more or less the best thing they can do”.

The retired events manager said a rival park was already adults only and it was harder to keep it going now “parents can’t take their children out of school”.