Poorer households may get help on energy bills 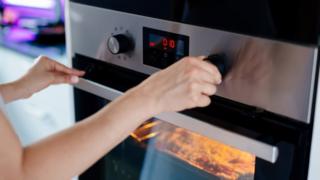 Households struggling with energy bills may get help from a government review of clean technology funding.

At the moment, an annual levy is imposed on gas and electricity bills to fund renewables such as offshore wind.

The burden falls disproportionately on the poorest in society, and it will get worse as the UK expands clean energy to tackle climate change.

The BBC has been told the government may shift the cost onto tax payers to avoid anger at climate policies.

A government spokesperson said: “We are definitely considering the way that costs are distributed.”

Currently about £10bn a year is being invested to support clean technology. Consumers pay about £5.5bn of that total through a levy on bills, which is about £186 of a typical energy bill.

They added: “The Treasury is looking at the costs of transition to net zero emissions by 2050.

“This will include how costs may be distributed across different groups to create a fair balance of contributions.”

Centrica, which owns British Gas, estimates that more than £20bn a year will be needed over a decade to fund the transition to a zero-carbon economy.

Centrica chief executive Iain Conn told the BBC: “The big question is, ‘who pays for this and how do they pay it?’.

“The people who can least afford energy as part of their outgoings are paying just the same (as the rich), which means as a percentage they are being hit harder.

“Before the costs get much higher I would advocate that the government needs to move the funding to income tax, which would mean a typical low income worker would save £100 a year. This would mean something like 2p in the pound on income tax.”

Mr Conn said another option for a government wanting to avoid increasing taxes would be to means-test households – but this would be complicated.

He said for average income households, shifting the emphasis from bill payers to tax payers would not make a great difference in overall annual costs.

Mr Conn continued: “In private a number of politicians do admit that the current system of paying is regressive. If one is thinking about who pays for things, it’s the right thing to be addressed.”

He is meeting the chancellor to talk through his proposal, but the BBC has been told that the idea is already being discussed as part of a Treasury review of climate and energy policy.

The government already has a package of measures to protect vulnerable energy consumers.

This includes the warm home discount that reduces the bills of vulnerable customers by £140, and the energy company obligation, which is focused on making fuel-poor households more efficient.

Its critics say it needs to be much more ambitious, with a national home insulation project to keep down bills and cut emissions.

These are the sort of issues that will be discussed by the UK Climate Assembly meeting in Birmingham this weekend.