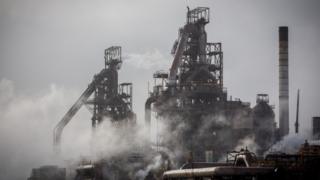 The chairman of the Tata group has said the company “can’t have a situation where India keeps funding losses” at its Port Talbot steelworks.

Natarajan Chandrasekaran, chairman of the Tata Sons group which owns the steelworks in Port Talbot, said the plant needed to be “self-sustaining” in an interview with the Sunday Times.

“Everyone will tell you that the Tatas have gone way beyond to keep this going,” said Mr Chandrasekaran. “Anybody else would have walked away.

“I don’t want to make those tall statements [about commitment]. We are taking some hard calls. So, hopefully, we should see some results.”

In November, Tata announced plans to cut 3,000 jobs across Europe.

Welsh Economy Minister Ken Skates said it “appears to be the case” that about 1,000 of those would be in Port Talbot.

Tata has two large steelworks in Europe – Port Talbot, and one near Ijmuiden in the Netherlands, about 18 miles (30km) north-west of Amsterdam.

Just under half of Tata’s 8,385-strong UK workforce are based in Port Talbot.

A new £50m blast furnace was opened in Port Talbot in January 2019, after which Hans Fischer, chief executive of Tata Steel’s European operations, said: “We are committed to build on our future for the UK.”

In June, a planned merger between Tata and German steelmaker Thyssenkrupp was blocked by the European Commission over competition concerns.

Paul Evans, the Unite union’s regional officer for Wales, said: “This interview just adds more pressure on the Tata workers at Port Talbot. The site is obviously key to the future of the other Tata plants in Wales.

“The workforce at Port Talbot have for many years proved they are the producers of world class quality steel and Wales and the UK can’t afford to lose the expertise and commitment they have shown over the years.”

A spokesman for Tata Steel’s European operations said: “What our chairman said in the interview has already been communicated to colleagues through our transformation programme.

“That programme is about building a stronger and more sustainable European steel business by improving profitability so we can pay for investments necessary to secure our long-term future.

“The plans include productivity improvements, reduced bureaucracy and increased sales of higher-value steels, as well as employment cost savings.”