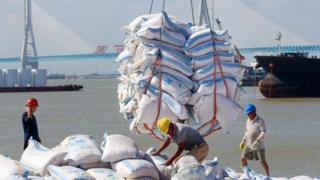 The US and China have agreed to roll back tariffs as part of any new trade deal, the two sides have said.

The statements come amid rising hopes that the two countries will sign a pact that declares an end to a trade fight that has disrupted the global economy.

Officials have described the in-the-works agreement as a partial, “phase one” deal that is unlikely to fully address issues over technology theft that helped launch the fight.

No signing date has been settled.

The two sides had been expected to present a phase one deal at a gathering of world leaders in Chile before the end of the year, but the country cancelled two summits planned for the coming weeks after domestic protests.

China had been pressing the US to remove tariffs on its goods as part of any deal.

A spokesman for its Commerce Ministry said the two sides had agreed to cancel the tariffs “in stages” as the agreement develops.

On Thursday, Reuters and Bloomberg reported that a US trade official had confirmed that some tariffs would be lifted, should a deal be reached.

Stock markets gained on the reports, seeing them as a sign that a deal is getting closer.

The US and China have imposed tariffs on each others’ goods, worth billions of dollars worth of annual trade since last year.

The duties have hurt trade, acting as a drag on the economies of both countries and putting pressure on their leaders to strike an agreement.

The International Monetary Fund estimates that the US-China trade war will shave almost a percentage point off of global growth this year.