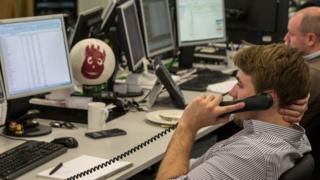 The pound has fallen back to where it was before the UK general election amid fresh concerns over a no-deal Brexit.

The government has said it wants to rule out any extension to the Brexit transition period beyond the end of next year.

The FTSE 250 share index, which features firms with more exposure to the UK economy, fell 1.4%.

Sterling and UK share indexes surged after the Conservatives won a clear majority in the UK general election.

Sterling climbed above $1.35 at one point – its highest level since May last year – and jumped to a three-and-a-half-year high against the euro, on hopes that the big majority would remove uncertainty over Brexit.

But the pound dropped back down on Tuesday morning after the government said it would add a new clause to the Brexit bill to rule out any extension to the transition period beyond the end of next year.

Critics say this raises the chance of leaving the EU without a trade deal.

But senior Cabinet Minister Michael Gove said that both the UK and the EU had “committed themselves to making sure that we have a deal” by the end of 2020.

Sterling loses all gains from before GE poll day vs $ and euro as PM decides to legislate against his Government’s room for manoeuvre on extending UK-EU trade talks beyond next year, as an attempt to leverage a quick deal.. raising chance of WTO terms in a year: pic.twitter.com/W5BIfe5dno

Andy Scott, associate director at financial risk advisor JCRA, said: “Sterling was slammed into reverse this morning, sliding around 1% versus both the US dollar and the euro after Boris Johnson announced the transition period will not be extended beyond 2020.

“By outlawing an extension, it leaves very little time in which to agree a comprehensive free trade agreement with the EU and means the clock is now ticking down to a firm cliff edge next December.

“Sterling’s impressive gains following the exit poll and election result have now been completely wiped out as markets are reminded that Boris Johnson’s promise to leave the EU is something he intends to fulfil, possibly without negotiating an amicable future relationship.”

Michael Brown, senior analyst at payments firm Caxton, said: “Markets are now more fearful of a no-deal exit at end of next year.”

Dean Turner, economist at UBS Wealth Management, said: “The pound’s latest slide is symptomatic of the fact that Brexit is a way off being ‘done’, and will remain important for sterling over the coming months.

“Despite the Prime Minister’s new-found majority spurring a relief rally, gains were always likely to be capped as investors turned their attention to phase two of the talks.”

Mr Turner added that the risk of the UK reverting to trading with the EU on World Trade Organization terms “could still drive larger sterling moves, particularly given the latest noises coming out of Downing Street.”

But David Cheetham, chief market analyst at XTB, said the move was “more symbolic than legally binding” as the bill could be superseded by future legislation.

However. Mr Cheetham added that the government stance “seems to suggest that for now the sizable majority held by the Conservatives means that the government will use this to play hard-ball with the EU, rather than to move back to the centre and alienate the more eurosceptic wing of the party.”