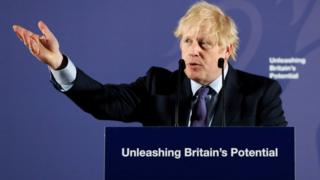 The pound has fallen in value as comments from Prime Minister Boris Johnson renewed concerns the UK faces leaving the EU without a trade deal.

Mr Johnson said he favoured a Canada-style free trade deal, but would use the existing Withdrawal Agreement with the EU if they failed to reach terms.

The UK officially left the European Union on 31 January and is now in an 11-month transition period to agree a free trade deal.

Mr Johnson said in a speech: “We want a comprehensive free trade agreement similar to Canada’s but in the unlikely event that we do not succeed then our trade will have to be based on our existing Withdrawal Agreement with the EU.”

John Allen, president of the CBI business lobby group, warned that failure to reach a free trade deal with the EU could hamper business investment.

“The challenge is to ensure business confidence is not caught in the crossfire of a tough, public negotiation,” he said. “Talk of a bare bones deal could pause investment.”

Mr Johnson rejected the EU’s position that the UK must follow its rules in order to secure a deal.

He added: “There is no need for a free trade agreement to involve accepting EU rules on competition policy, subsidies, social protection, the environment or anything similar, any more than the EU should be obliged to accept UK rules.”

However, EU chief negotiator Michel Barnier said: “First and foremost, we will defend the interests of the union, its citizens and its businesses.”

“We’ll continue to prepare for a situation where no deal is being arrived at. We certainly don’t want that to happen. We’ll work to avoid that, but if we can’t manage a deal by the end of the year there will be a cliff-edge on many fronts.”

Under an EU-Canada agreement, import tariffs on many goods are eliminated but they still face customs and VAT checks.

Commenting on Mr Johnson’s speech, Food and Drink Federation chief executive, Ian Wright said: “We urge UK and EU negotiators to take a common sense approach to recognising equivalent food standards so we do not inadvertently raise barriers to trade.”