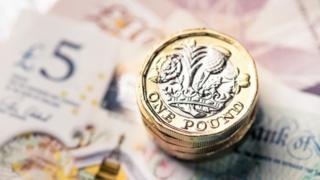 The pound has soared after a Brexit deal was agreed between UK and EU negotiating teams.

Sterling surged more than 1% against the dollar, climbing above $1.29, after Prime Minister Boris Johnson said the UK and EU had agreed a “great new deal”.

The pound also jumped against the euro, and was trading above €1.16.

European Commission President Jean-Claude Juncker said: “Where there is a will, there is a deal – we have one!”

He added: “It’s a fair and balanced agreement for the EU and the UK and it is testament to our commitment to find solutions. I recommend that [EU summit] endorses this deal.”

The agreed deal will still need the approval of both the UK and European parliaments, while Northern Irish party the DUP has cast doubt on its sign-off, saying it still cannot support it.

Earlier, the DUP released a statement saying it could not back proposals “as things stand”, and – after the PM’s announcement – said its statement “still stands”.

Shares in companies with heavy exposure to the UK economy – such as housebuilders and banks – saw some of the biggest increases.