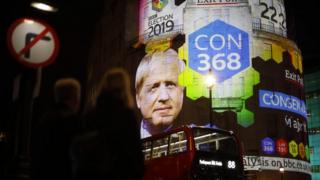 The pound surged against the dollar after exit polls suggested the Conservative Party was on course for a comfortable general election victory.

Sterling gained 3% to $1.35 – its highest level since May last year – on hopes that a big majority would remove uncertainty over Brexit.

The pound also jumped to a three-and-a-half-year high against the euro.

Prime Minister Boris Johnson has pledged to take the UK out of the European Union by 31 January.

Exit polls indicated that the Tories could achieve an 86-seat majority. The BBC’s economics editor, Faisal Islam, said a big win for the Conservatives pushed leaving the EU without a deal into the distance, and the financial markets are breathing a sigh of relief.

“The most disruptive form of no deal has been taken off the table. The market reaction is a reflection not just of the result, but of the fact that [a big majority] gives the prime minister room for manoeuvre.”

UBS Wealth Management economist Dean Turner said: “Just as Boris Johnson was desperately seeking his majority, this result would give the markets their ultimate wish: clarity.”

Capital Economics chief UK economist Paul Dales said there is no guarantee that the exit poll numbers will be confirmed as the results of the general election come in overnight.

But he said: “If the Conservatives do win a majority, passing a Brexit divorce deal in the coming weeks would remove any risk of a no deal Brexit on 31 January, reduce the immediate uncertainty and lift business investment at least a bit.

“And in a Budget in February, the Conservatives would probably give the economy an extra kick by raising public investment by up to £20bn.

“Together with the removal of some risk of Labour’s anti-business policies, this explains why the pound has already risen from $1.31 to $1.34.”

The poll projected that Labour has lost 71 seats to 191.