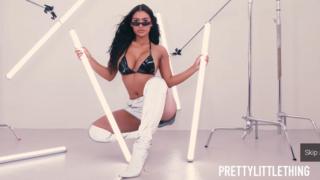 An advert for fashion retailer Pretty Little Thing which featured women wearing exposing lingerie has been banned for being “offensive”.

The YouTube ad presented the firm’s products in an “overly-sexualised way” and depicted women as sex objects, the Advertising Standards Authority said.

The retailer is one of several online fast fashion companies to have been rapped for their racy marketing.

Pretty Little Thing said it “in no way meant to cause any offence”.

The advert began with a woman looking over her shoulder in a seductive manner wearing black vinyl, high-waisted chaps-style knickers.

It then showed other scantily clad women in seductive or “highly sexualised” poses, including one wearing a transparent mesh bodysuit.

A viewer complained and the regulator agreed, saying the ad was “irresponsible” and likely to cause offence.

Pretty Little Thing said it “celebrates all women” and promotes body diversity. But the ad, which aired in October last year, must not be shown again.

A previous Pretty Little Thing advert was banned in 2017 for portraying a model who appeared to be under 16 in a “sexually suggestive” manner.

Another online fashion retailer, Boohoo – which owns Pretty Little Thing – had its email advert banned for using the phrase “send nudes”, which a viewer complained made light of a potentially harmful social trend.

It may seem surprising for an advert targeted at women to be banned for objectifying women, but the defence used by Pretty Little Thing in this case touches on an increasingly contested grey area.

The company says the advert promoted diversity through “bold and distinctive fashion of all shapes and sizes”, and that they worked hard to promote “a healthy body image that was inclusive and empowered women”.

But the line between empowerment and objectification of women is a subjective one.

Fast-fashion retailers are more likely to push those boundaries. Research we conducted last year found that online-only brands were twice as likely to use more overtly sexualised pictures when selling their clothes than High Street retailers’ websites.

It also seems that there’s also a growing generational divide. While talking to young people, who these adverts are targeted at, it seemed they were more likely to see them as positive images of women being body-confident whatever their shape. Many in older generations view the same images very differently.

Do you think online fashion advertising is too racy, or are people over-worrying? You can get in touch by emailing haveyoursay@bbc.co.uk.