PrettyLittleThing advert ‘makes me feel good about myself’ 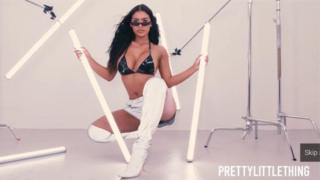 A model dressed in vinyl and a bikini top dances with neon poles in a dimly-lit studio.

It is not a scene from a music video or a night club promotion but an advertisement for women’s clothing which was this week banned for overly-sexualising and objectifying women.

PrettyLittleThing, the online fashion retailer responsible for the advert, says it “celebrates all women and body diversity”.

And it seems that many women agree – and don’t see what all the fuss is about.

“I don’t think this objectifies women at all,” said Lottie Lovelock, 23. “I think PrettyLittleThing have picked up on the current female trends in the industry and have played to it well.

“If you look at what girls are wearing to festivals and on holidays to places like Ibiza then this advert is pretty PG [Parental Gudiance rating].”

The Advertising Standards Authority said the advert, which appeared on YouTube, presented PrettyLittleThing’s clothing “in an overly-sexualised way that invited viewers to view the women as sexual objects”.

“We therefore concluded that the ad was likely to cause serious offence and was irresponsible.”

But if anything, the ban has strengthened the brand’s position, said Julie Palmer, a retail expert at professional services firm Begbies Traynor.

“This is what fashion is all about. Younger shoppers want to see brands pushing the envelope – they don’t want to wear M&S like their parents, they want something edgy, so this ad is preaching to converted.”

Some women said they found the scenes in the advert normal or even encouraging.

Ms Lovelock said: “Women wear what they feel confident in and the girls in the advert aren’t all really skinny, they are all shapes and sizes. Boohoo and Missguided all do adverts like this and I think its normal. If you look at the ads before [ITV programme] Love Island, they are all provocative.”

Jo Shenoy, 35, said adverts like this give her a boost because the models are a healthy but realistic size.

“I am the target audience for this, I follow things that get posted online and I do buy copycat versions based on what I see. This is an image that makes me feel good about myself and gives me confidence.”

“I’m grateful to see images of healthy models who are also physically fit. It’s a demand and supply thing; women are looking at this and buying the stuff – it sells.”

But others disagreed that the advert promoted body diversity or was particularly empowering.

Deborah Hughes, 22, started buying clothes from Pretty Little Thing when she was younger.

“But I don’t like shopping there now because of the way the models pose online,” she said. “It means you can’t even really see the clothes.

“And you don’t see normal figures on there because of the models they choose, who are then photoshopped; it’s not promoting diversity at all.”

Amanda McCready, 39, says she worries about the impression her young daughter will get from these types of adverts.

“I have a four-year-old girl and I don’t want her to be subliminally influenced by looking at this.

“These ads depress me. I fully agree you should wear what you want without being harassed but this is catering to what advertisers say we should look like.

“If you choose to be in that advert and make money then that’s fine, and if you’re empowered then that’s fine. But it’s that it has become normalised – how have we got to this point?”

Ms Palmer said there will always be two sides to the argument. “And there will be young women who say they should be able to express themselves however they want, and if other people don’t like it that’s their problem.”

But ultimately, Ms Palmer said the advert “has achieved what advertising should be doing – which is getting noticed”.