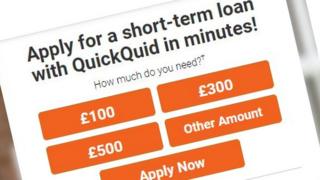 Borrowers who believe they were mis-sold a loan by collapsed payday lender QuickQuid will need to apply for compensation via an online portal.

The company’s administrators, Grant Thornton, will run the system and have promised it will be “quick and easy”.

The portal is not yet live, but is expected to be similar to the claims service for ex-Wonga customers.

QuickQuid’s owner, US-based Enova, said on that the UK business would close. On Friday, administrators were appointed.

QuickQuid has been the biggest payday lender in the UK for the past few years.

‘I could have put my finances back in order’

Some QuickQuid customers who had already made claims must now wait to see how much they will receive in compensation.

Administrators Grant Thornton said that compensation for successful claims would be “considerably smaller” than would have been the case before QuickQuid’s collapse.

That will affected former customers such as Christian White, a teacher in Basingstoke, who was expecting compensation of about £18,000.

The Financial Ombudsman had ruled that 24 loans were mis-sold, but this had been disputed by QuickQuid. As a result, his case was awaiting a final adjudication, but any payout will now be a fraction of what he would have expected.

“It would have made a very significant difference to me. I could have put my finances back in order and I would have been able to start afresh. This will set me back years,” Mr White said.

“I do feel very let down by the financial system and I also feel very frustrated by how long it’s taken the Financial Ombudsman.”

“The news means almost certainly I will not receive anything like this money. I accept that I took out these loans, I am responsible, but I had a mistaken view that I should pay back my debts instead of being called bankrupt.”

QuickQuid is one of the brand names of CashEuroNet UK, which also ran On Stride – a provider of longer-term, larger loans and previously known as Pounds to Pocket. All have now stopped lending and are part of the administration process.

Thousands of compensation claims have been made from customers who said they were given loans they could not afford to repay.

Others, who believe they may have been mis-sold loans and have yet to make a claim, will eventually need to apply via the online portal. These will be assessed using criteria agreed with the Financial Ombudsman.

However, the amount actually paid out from an eligible claim will only be calculated when the company’s assets are sold, but will only be a fraction of the total compensation award.

“This is because it is expected that the total value of all accepted claims received will significantly exceed the money available to be shared out,” the administrators said.

QuickQuid was bigger than household name Wonga even before the latter folded in August last year. Administrators for Wonga recently revealed that 389,621 eligible claims have been made since its demise.