Rail fares to rise by 2.7% in January

November 30, 2019 by Joshua Marshall No Comments 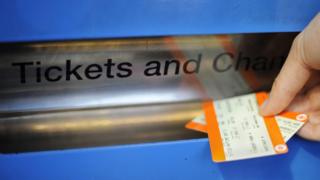 Millions of commuters will have to pay an average of 2.7% more for rail tickets from 2 January.

The rise, announced by industry body the Rail Delivery Group, is lower than the 3.1% increase at the start of 2019.

Train companies say this is the third year in a row that average fares have been held below the benchmark inflation measure on which rises are based.

But many commuters will still face an increase of more than £100 in the annual cost of getting to work.

Independent watchdog Transport Focus said a majority of rail users did not feel they were getting value for money.

The news comes as commuters on South Western Railway services are steeling themselves for a 27-day rail strike next month.

Rail, Maritime and Transport (RMT) union members will walk out in a long-running dispute over guards on trains.

About 40% of annual rail price rises in England, Scotland and Wales are regulated, which means that they are pegged to the Retail Prices Index (RPI) inflation measure for the previous July. This year, that figure was 2.8%.

But RPI inflation is generally higher than the most widely watched measure of inflation, the Consumer Prices Index.

And passenger groups have repeatedly called for the system to be changed, since RPI inflation was abandoned by the National Audit Office as a national statistic in 2013.

Rail Delivery Group chief executive Paul Plummer said the extra money was allowing the train companies to invest in improvements to the network, including 1,000 extra services a week in 2020.

He added: “The industry will continue to push for changes to fare regulations to enable a better range of affordable, mix-and-match fares and reduced overcrowding on some of the busiest routes.”

Mr Plummer said that 98p in every pound from fares went towards the cost of running the railway.

A spokesperson for Transport Focus said: “We speak to thousands of passengers each year and we know that less than half feel they get value for money.

“After a year of patchy performance, passengers just want a consistent day-to-day service they can rely on and a better chance of getting a seat.”

Transport Focus called on passengers to “make their voice heard” and claim compensation every time they suffered a delay or cancellation.

Payouts vary depending on the type of ticket, the length of delay and the operator. Some firms begin paying compensation if a train is delayed by 15 minutes.

Passengers normally need to claim the compensation as payouts are not automatic with most operators.