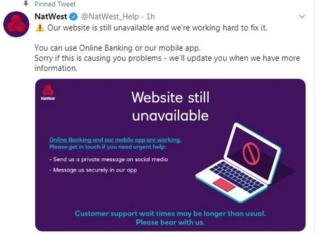 RBS and NatWest suffered major problems with their websites as the UK went back to work after the Bank Holiday weekend.

The sites stopped working at around 09:00 BST according to reports and were still out of action five hours later.

Both banks tweeted that customers could use other methods to access accounts.

But some people were complaining on Twitter that they were still unable to complete transactions, with one tweeting NatWest to say: “It’s like the money is disappearing.”

The banks were advising customers to use mobile apps, telephone banking or ATMs, or visit their local branch, while they said that direct online banking links were also working.

After 14:00 BST, some customers did tweet to say they had successfully logged in, but the problems appeared to be continuing in general.

NatWest is part of the RBS group and it is not the first time that both banks’ websites have gone down.

Figures published last week showed that they were the banks with the most problems in the past three months, although Barclays has had the most in the past year.

Barclays reported 33 incidents in the 12 months to the end of June this year, higher than NatWest which had 25 and Lloyds Bank, which had 23.

Have you been affected by RBS and NatWest’s website issues? Please share your experiences by emailing haveyoursay@bbc.co.uk.