‘Request an ATM’ service to be launched 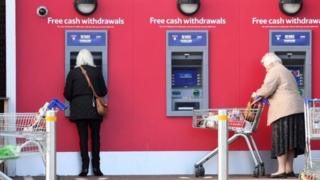 Communities will be able to request a free-to-use ATM for their area if they are finding it hard to access cash.

Link, which oversees the UK’s network of cash machines, has set up a £1m fund to pay for ATMs in so-called cash deserts, although this will only fund 40-50 machines.

It said more money could be added to the fund if the service proved popular.

Criteria for successful bids include a lack of nearby ATMs, a safe location being found, and no Post Office access.

A report published this week by banking trade body UK Finance said that there were 52,358 free-to-use machines operating in the UK at the end of 2018. Another 11,002 pay-to-use machines were also in place.

A total of 2.4 billion withdrawals were made from these machines last year, with £193bn of cash being taken out.

The number of withdrawals from ATMs dwarf the alternative ways that consumers can access cash, such as debit card cashback (150 million withdrawals in 2018) and over the counter withdrawals (55 million in 2018).

Consumer groups and campaigners have raised concerns about the falling number of cash machines in the UK.

Consumer association Which? recently revealed that free-to-use cash machines were disappearing quicker in deprived areas than in affluent ones.

The organisation and Natalie Ceeney, who compiled an independent report on Access to Cash, are calling on Chancellor Sajid Javid to guarantee people can get hold of cash if they need it.

It called for an independent body, funded by the banks, to be set up that would step in if local communities were running short of access to cash in shops and ATMs.

The new scheme, set up by Link, does not go that far, but does allow communities – individually, or through their MP or council – to request help directly from Link to fund new cash machines. The Link fund is financed by its bank and building society members.

Applications are being taken now, although 11 sites have already been identified for directly installed ATMs.

They are: Deal, Ebbw Vale, Margate, Middleton, Wilmslow and York, as well as pilot sites in Battle, Bungay, Nuneaton, Tywyn, and Durness.

Battle, in East Sussex, was successful as tourists travelling to the area on a Sunday to visit the Battle of Hastings sites were unable to access cash, as the local Post Office is closed on that day each week.

Each application for a similar ATM would need to satisfy criteria such as whether a retailer or council can find a safe location to host the machine. If there is another free-to-use ATM within 1km in the community and no particular geographical challenges to reaching it, applications may be unlikely to be successful.

John Howells, chief executive of Link, said: “[We are] looking forward to getting the first requests for ATMs so we can help solve access to cash issues across the whole UK.”

Link said it was also supporting a scheme, across the UK banking and finance industry, aimed at finding ways that communities can access cash or be guided in the use other methods of paying for goods and services.

The Federation for Small Businesses (FSB) described the move as a “promising step in the right direction”.

“When an ATM is removed from a local area, we know it is especially difficult to get one reinstalled later on, and we hope this move can help,” said FSB national chairman, Mike Cherry.