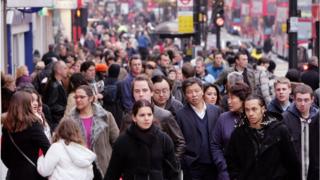 Retail sales fell in November with shoppers keeping a tight grip on spending amid uncertainty about Brexit and ahead of December’s election.

Monthly retail sales fell by 0.6% in November, the fourth month in a row without growth, the Office for National Statistics said.

Black Friday fell on 29 November this year, outside of the ONS reporting period for the month, which ended on 23 November.

However the ONS said it had adjusted for where in the calendar Black Friday discounting fell when calculating its year-on-year analysis.

That figure showed growth of 1% to November, the weakest annual growth since April 2018 and much lower than the 2.1% rate economists had predicted.

Even if Black Friday ended up having a bigger effect than the ONS is calculating, he predicted this was “not a very merry Christmas for retailers”.

Figures indicate that Black Friday this year was quite a bright spot in an otherwise gloomy retail environment.

Barclaycard, which processes nearly £1 of every £3 spent in the UK, said at the beginning of December that sales volumes from 25 November to 2 December were up 7.1% compared with 2018, while sales value rose by 16.5%.

But it has been a tough year for the retail industry in the UK, with a net 1,234 stores disappearing from Britain’s top 500 High Streets in the first six months, according to accountants PwC.

Prime Minister Boris Johnson’s sweeping election victory last week has all but eliminated the risk of a disruptive no-deal Brexit on 31 January, removing some of the uncertainty hanging over the UK economy.

Some economists said that in the near term, Mr Johnson’s election win should be good for consumer spending and the economy.

Duncan Brewer, a partner at consultancy firm Oliver Wyman, said “the general euphoria of a Conservative majority and a better exchange rate for the pound may lead to more spending over Christmas and in the New Year.”

However, Mr Brewer added that this uplift for consumer spending “will likely only be short-lived”.

“Despite more temporary political stability and low unemployment, we expect that at least two major well-loved British retailers will go bust over the course of next year, and that 100,000 jobs will be cut across the sector due to a combination of overall stagnated spending, cost-cutting and increased automation,” he said.

Samuel Tombs, chief UK economist at Pantheon Macroeconomics, said that inflation “is set to hover about 1.5% over the next nine months, while a revival in corporate confidence following the election should lead to stronger growth in employment.”

“Disposable incomes also will be boosted by the recent sharp fall in mortgage rates and a big increase in the threshold for National Insurance contributions in April,” Mr Tombs added.