Robert Burns ‘worth more than £200m to Scottish economy’

January 11, 2020 by Joshua Marshall No Comments 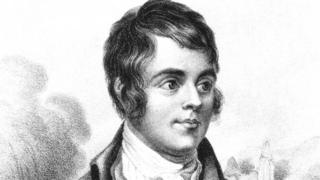 The research estimates Burns’ brand is worth almost £140m annually

The economic and cultural importance of Robert Burns is worth £203m to Scotland each year, according to a new report.

The University of Glasgow study found that the “worldwide fascination” with the poet supports Scottish businesses.

It showed that investments in Scotland to recognise the bard, including the opening of the Robert Burns Birthplace Museum, have helped increase his value.

The report includes a number of recommendations to help grow the value of Burns’ brand for Scotland.

The biggest economic benefit is Burns-related tourism, which brings in just under £155m, almost two-thirds of which goes to Ayrshire and Arran where the poet was born and lived most of his life.

More than £200m is made through tourism, products and festivals celebrating the poet, and researchers also estimated that the Burns’ brand is worth an additional £140m each year.

Prof Murray Pittock, who led the research, said the Scottish poet “still holds a huge fascination for a worldwide audience”.

“Burns has universal appeal with his work being translated into every single major language including Russian, German, French and Chinese. While Auld Lang Syne is our New Year anthem and has been performed by everyone from Elvis Presley to Jimi Hendrix.”

He added: “We hope that our research will help to inform and encourage Scotland to continue to develop plans to promote Burns at home and abroad. It also shows the great potential of Burns’ brand to support regional inclusive growth from hotels and restaurants to food, drink and memorabilia.”

The research showed that in the last two decades, a number of changes have taken place in Scotland recognising the poet’s importance.

This includes the opening of the £23m Robert Burns Birthplace Museum in 2009. The museum in Alloway is second only to Shakespeare among UK writers’ museums in terms of visitor numbers.

Burns Suppers are held every year to celebrate the Scottish poet

The traditional celebration of the poet’s life and work is held every year on the anniversary of his birth.

Celebrations take place across the world on 25 January and have an estimated value of £7m to Scotland’s economy.

Robert Burns’ poems and songs have been translated into every major language, and almost 10 million people worldwide are estimated to attend Burns Suppers each year.

The research also estimated that £20m is spent on Burns-related food and drink annually.

Economy secretary Derek Mackay said: “It goes without saying that the cultural and societal importance of Burns the brand is enormous. In fact, the report highlights that the values and identity of Robert Burns – the lover of nature, the innovator, and the humanitarian – resonate with the identity of modern Scotland.”

The report makes a number of recommendations to use the Burns brand to “drive economic growth for Scotland.”

These include increasing references to the poet on motorway road signs and renaming Prestwick Airport in honour of the bard.

It also asks the Scottish government to establish a Burns Humanitarian Ambassadors programme to recognise work carried out in Scotland and abroad.