Rutland: England’s only county without a McDonald’s 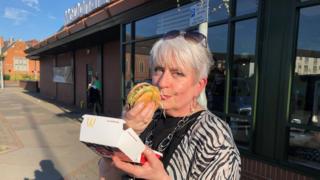 The picturesque county of Rutland boasts a Michelin-star restaurant, dozens of gourmet eateries and regular farmers’ markets – but what it doesn’t have is anywhere to pick up a Big Mac. This may all be about to change.

These days, it seems impossible to drive anywhere without the golden arches of a certain fast-food chain looming into view. But there is a whole county in England that remains a Happy Meal-free zone.

Rutland has seemingly escaped the US burger giant’s attention until now, but McDonald’s has set its sights on the market town of Oakham and submitted a planning application for a drive-through restaurant on its outskirts.

Resistance to the scheme is strong among the nearly 40,000 people in this traditional, conservative county. More than 50 people have so far made official representations to the council’s consultation, with comments like: “I’m proud that Rutland is the only county not to have a McDonald’s.”

Many fear the arrival of a big-name, fast-food restaurant will forever change the character of the nation’s smallest county – famous for its hunting scene, tourist-attraction reservoir, and independent schools.

“It’s disgusting – Oakham is not the place for it,” says Sandra Wells, 57, who has lived in Rutland all her life. “I don’t like fast food and there are too many McDonald’s [elsewhere].”

Gym owner Jade Smith, 35, moved to the county five years ago because she and her partner liked its absence of big chains. She said officials should be encouraging local businesses instead.

“People say it’s something for the kids but is that what we’re aspiring to? Our beautiful town doesn’t need a McDonald’s. It will open up the doors [for other chains] and kill it off.”

Indeed, business owners are anxious about big-chain competition in such a small area.

“It’s such a small town to have a McDonald’s,” said Gaz Ali, who has managed Indian takeaway Eastern Delights for 20 years. “And at the end of the day it’s going to bring riff-raff.”

McDonald’s has about 1,300 restaurants across the UK, but has not always successfully won over residents. When a McDonald’s arrived in Tavistock in Devon in 1997, people boycotted and nine years later, the firm announced it was leaving.

Its failed encounter has seen other fast-food chains back away from the town, according to Steven Eperon, manager of The Cornish Arms pub.

“It’s put a stop to anyone else like KFC or Burger King coming here,” he said. “We are surrounded by great produce, we do street food festivals and farmers’ markets and people come here for the quality of the food. Perhaps the only thing we’d take is a Subway. Some of the kids round here drive half an hour into Plymouth for that.”

Mr Eperon believes McDonald’s suffered partly because of its location, having chosen an “awkward site outside the town centre”.

In Oakham, the burger chain hopes to build off Lands End Way, close to the bypass built 10 years ago.

It is surrounded by a large housing estate developed in recent years while the site itself is already home to a large out-of-town Aldi and a BP garage with an M&S Simply Food store.

“A town with a ring road built around it is often a very attractive proposition for a brand like McDonald’s – particularly if there is infill development,” said Trevor Watson, executive director of restaurant property agents, Davis Coffer Lyons.

“They will take into account the demographics and the age profile of the surrounding residents but also the kind of people driving past. And if there is no competition in the area, it’s going to be attractive.”

This is exactly what concerns resident Alan Eager, 51 – he fears the “type of people” it will bring to Oakham and is worried families with young children are “a prime target” for McDonald’s.

But those in the town who do enjoy a Big Mac are happy at the prospect of not having to travel to a different county every time they want a fix.

Stephanie Simmons, a 41-year-old mother of two, visits the latter with her family as often as twice a month.

“Rutland has changed immensely – when I was a girl, I could have had a picnic sitting in the middle of the high street. But it’s the march of time. It remains a lovely place to live and I think the people will take to Big Macs.”

Oakham is a pretty, conservative town with prestigious schools and traditional buildings

Oakham’s mayor David Romney supports McDonald’s plans – it is suggested the restaurant could create 65 jobs – and believes it will lift the town out of the “Dark Ages”.

“Do you want to end up with a very sleepy town with shops closed?” he asked.

He said younger people were having to leave town for work once they finish school. Indeed, they are notably absent from Rutland’s ageing community – figures show 28% of the county’s population is aged over 60 and there are far fewer 20 to 24-year-olds than 15 to 19-year-olds.

Abi Pepperdine, a 19-year-old waitress, says many of her friends are struggling to find work locally.

“People go away for university but when they come back, there’s nothing here,” she said. “The jobs McDonald’s would bring would be helpful.

“Some look down on McDonald’s, especially older people, but it would not be that bad – if you don’t want to go, don’t go.”

Despite fears for Oakham’s independent scene, the arrival of a McDonald’s in the town would not be a “death knell” for retailers, argues Nelson Blackley from the National Retail Research Knowledge Exchange Centre.

“McDonald’s is not planning to plonk their site next to the castle in the centre of Oakham.

“It’s not in the heritage part of the town. It’s a site on a bypass outside the town with an existing petrol station and convenience store.

“The fact their application includes a drive-through suggests they are looking not just to target the people of Rutland but also tourists to Rutland Water.

“From an economic point of view, I would suggest that can only be a good thing.”

McDonald’s said its restaurant would be “beneficial” to Oakham.

“We fully understand the historic nature of the town centre which has no suitable sites for our proposal,” a spokesman said.

“We believe locating the restaurant on the outskirts of town, near the A606, is the most beneficial and appropriate location.”

Rutland County Council is still deciding what to recommend to its councillors. Outside one recent consultation event, a passing builder wound down his window and asked why people were gathered.

When told it was about the prospective McDonald’s, he laughed and shouted: “No-one says no to a Big Mac.”

It remains to be seen whether Rutland will be able to do so.