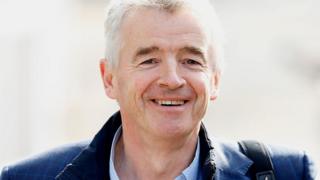 Nearly half of Ryanair’s shareholders voted against a pay deal for Michael O’Leary that could hand the chief executive €99m (£88m).

The Irish airline said that just 50.5% of investors voted in favour of the company’s remuneration report.

The revolt comes at a difficult time for Ryanair which is facing more strike action from pilots and is cutting jobs.

Following the vote, a spokesman said it would consult with its investors.

He said: “Ryanair is, and will continue, to consult with its shareholders and we will report back to them over the coming year on how the board will adapt its decision-making to reflect their advice and input on all these topics.”

Earlier this year, Mr O’Leary signed a new contract to stay on as chief executive until 2024.

Under the deal he stands to make €99m from stock options if he doubles Ryanair’s profit or share price.

In the last financial year, however, the airline’s profit dropped sharply and Mr O’Leary said on Thursday that he was planning to cut between 500 and 700 jobs.

Ryanair said Mr O’Leary’s agreement to stay for another five years “gives certainty to our shareholders”.

It also noted that his remuneration is “considerably lower than many other European airline chief executives”.

However, a sizeable number of the airline’s shareholders voted against the company’s remuneration report at its annual general meeting (AGM) on Thursday.

Pilots are planning more walkouts this month in a row over pay and conditions.

The pilots’ union Balpa said its members want the same kind of agreements that exist in other airlines on pensions, loss of licence insurance, maternity benefits allowances and pay.

Ryanair branded earlier strikes as “pointless” as industrial action had not resulted in any flight cancellations.

Under his new deal, Mr O’Leary’s pay and the maximum annual bonus have both been cut in half to €500,000.

These are shares he can acquire for €11.12 and then sell at the market price if Ryanair’s profits hit €2bn in any year up to 2024 or its share price reaches €21 for a period of 28 days from April next year. He would then pocket the difference.

The company’s shares are currently trading at €9.84.