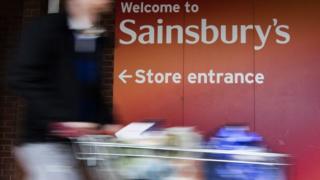 Sainsbury’s plans to cut hundreds of management roles as the supermarket chain integrates further with Argos.

The supermarket will merge more teams across the business, including in commercial, retail, finance, digital, technology and human resources, it said.

Sainsbury’s said the proposals were part of £500m cost savings plans that had previously been announced.

Since March 2019, Sainsbury’s has axed one in five senior leadership roles.

However, it subsequently announced more cost cutting after its mega-merger with UK rival Asda failed.

Sainsbury’s has already detailed plans to shut up to 70 Argos stores and move them inside its supermarkets.

But the supermarket said on Tuesday that “hundreds” of management jobs will also go.

Sainsbury’s chief executive Mike Coupe said: “We have to adapt to continue to meet the needs of our customers now and in the future and, while change can be hard, it’s also necessary.”

A spokeswoman said the planned management cuts were part of efforts by the supermarket to try to avoid duplication of roles between Sainsbury’s and Argos.