Samira Ahmed: How to know if you’re getting equal pay 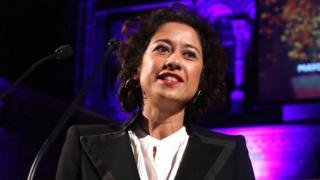 BBC presenter Samira Ahmed has successfully taken the broadcaster to court after she was paid less than a male colleague doing similar work.

So what exactly is equal pay, and how can you find out if you are not being paid enough?

What is equal pay?

Equal pay is the legal right for men and women to be paid the same for:

Pay does not just refer to salaries. It also includes employee benefits like holidays and pension contributions, as well as company cars and bonuses.

It has been part of UK law since the 1970 Equal Pay Act, and is now also part of the Equality Act 2010. It means all employees are entitled to equal pay, regardless of whether they are on full-time, part-time, or temporary contracts.

How do I find out if I am being paid equally?

Discussing pay with colleagues can be awkward. But it can be a good first step in finding out whether or not you are being paid equally.

Looking at salary ranges in job adverts from your employer, or finding out the typical rate for similar jobs in the same industry can also be helpful.

The Advisory, Conciliation and Arbitration Service (Acas) provides impartial advice to workers and bosses on workplace disputes or issues. It says any employee who suspects they are not receiving equal pay can ask their manager to explain if there is a pay difference.

An employer may be able to defend themselves from a claim if they prove the reason for the difference is due to a genuine factor and is not based on the sex of the employee.

How do I claim equal pay?

An employee can try to resolve the issue first with their boss or HR. They could also raise a grievance, which is a formal complaint.

If that doesn’t work, they can complain to an employment tribunal, independent bodies which deal with work-related legal claims. But the claimant has to contact Acas first, which offers a voluntary early conciliation procedure to try and resolve things without a tribunal.

An equal pay claim can be taken to tribunal up to six months after leaving the role. There are no fees but if you choose to pay for a lawyer that could be expensive.

The person bringing the claim must point to a “comparator”. That is, someone of the opposite gender currently or previously working for the same employer, doing the same or equivalent work and receiving more pay or benefits.

The tribunal can order contracts to be amended, compensation, or up to six years’ back pay to be awarded to the employee.

As our Reality Check team found out, cases are not solved very often at tribunal. That is partly because demonstrating different jobs are of equal value can be a difficult and drawn-out process.

She adds: “Women are more tempted to settle equal pay than other claims because they realise the legal hurdles to overcome are complex, time-consuming and expensive.”

What famous cases have there been?

Presenter Samira Ahmed has successfully taken the BBC to an employment tribunal over alleged unequal pay.

Ms Ahmed said she was underpaid for hosting audience feedback show Newswatch when compared with Jeremy Vine’s salary for Points of View.

The journalist had argued she was owed almost £700,000 in back pay.

Carrie Gracie previously resigned from her role as China editor in a dispute over equal pay at the BBC.

It later apologised for underpaying her and said it “has now put this right” by giving her back pay. She donated the full, undisclosed amount to charity.

Several other high-profile cases have come to a head in recent years.

Last year, Glasgow City Council agreed to pay out a reported £548m to compensate thousands of women who were paid less than men in jobs of the same grade.

More than 8,000 women employed in schools, nurseries and in cleaning and catering services by the council had been on the biggest-ever equal pay strike in the UK.

Supermarket Asda also lost an appeal in a long-running legal dispute over equal pay in January.

The decision meant that lower-paid shop staff, mostly women, can compare themselves with higher-paid warehouse workers, who are mostly men.

Is equal pay the same as the gender pay gap?

No. Equal pay is awarding men and women the same amount to do identical or equivalent work, and is a legal requirement for businesses.

The gender pay gap refers to the percentage difference between average hourly earnings for all men and women in a company, sector or across the country. If women are being paid more, that’s called a negative pay gap.