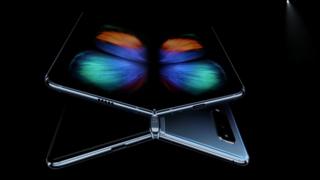 Samsung’s first foldable phone will go on sale on Friday after problems delayed its initial release.

The Galaxy Fold will be available on 6 September in South Korea, with a UK launch following on 18 September.

The release of the nearly $2,000 (£1,634) device in April was postponed after early reviewers reported broken screens.

Samsung has been rushing to launch the folding smartphone before its rivals.

The firm said in July it had made “improvements” to the device and planned for the phone to go on sale in September.

It comes as the firm has seen profits tumble amid a broader industry slowdown, weighed down by the US-China trade war.

It is also navigating possible disruption to its chip business from a trade row between South Korea and Japan..

Huawei became the second-largest smartphone seller in the world last year and plans to launch its folding smartphone in September..

Earlier this year, Chinese technology firm Xiaomi unveiled a prototype of a folding smartphone that transforms into a tablet..

The Galaxy Fold is being released in a small number of countries including South Korea, the US, the UK and Singapore.