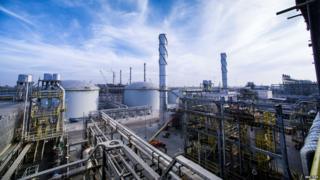 The share sale was the biggest ever, surpassing that of China’s Alibaba which raised $25bn in 2014 in New York.

Aramco relied on domestic and regional investors to sell a 1.5% stake after lukewarm interest from abroad.

The IPO values it at $1.7tn – short of its $2tn target, but making it the most valuable listed company in the world.

The share sale is at the heart of Crown Prince Mohammed bin Salman’s ambitions to wean the Saudi economy off its dependence on oil.

The price of oil collapsed in mid 2014 and has yet to fully recover, leaving many Gulf economies under pressure.

Aramco has found the journey to its public offering testing.

It had initially sought to raise $100bn on two exchanges – with a first listing on the kingdom’s Tadawul bourse, and then another on an overseas exchange such as the London Stock Exchange.

But it had to scale this back after foreign investors baulked at the company’s valuation and raised concerns about corporate transparency.

Instead, it focused its marketing for the share sale on Saudi investors and wealthy Gulf Arab allies. Saudi banks also offered citizens cheap credit to bid for the shares following a nationwide advertising campaign.

Shares went on sale on Thursday at 32 Saudi riyals ($8.53) each and were heavily oversubscribed, according to reports.

However, it remains to be seen whether the share price rises or falls when trading begins.

The IPO came as Saudi Arabia met with Russia and other members of the Organization of the Petroleum Exporting Countries (Opec) in Vienna to discuss oil production.

The allies – who together pump 40% of the world’s oil – agreed to deepen output cuts as part of ongoing efforts to prop up global prices.

It comes as Opec countries struggle with a slower global economy and a flood of new production from countries outside the cartel, such as the US.

Three years after it was first announced Saudi Arabia is finally taking the world’s most profitable company public. The market valuation is less than the $2tn target that Crown Prince Bin-Salman – had initially hoped to achieve.

The company has committed to a large annual dividend until 2024 to ensure investors don’t sell shares in the near future leading to a drop in market valuation.

But analysts believe the biggest challenge for the company will be if it decides to list on an international stock exchange in the future to expand its investor pool. The core business of Saudi Aramco – oil – is considered by many experts its biggest risk.

Demand for crude has been falling, which would make it difficult for the company to grow over a long-term period. The climate crisis and geopolitical risks are also other key factors that could deter potential investors.