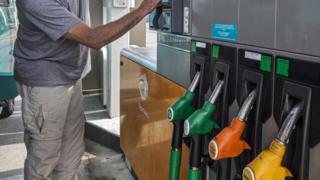 The Khurais oilfield produces about 1% of the world’s oil, and Abqaiq is the company’s largest facility – with the capacity to process 7% of the global supply.

Questions being asked centre on whether this attack could not have been prevented by a company with such deep pockets and whether it can happen again.

A barrel of crude oil cost $60 (£48) on Friday and some analysts believe that could spike up to $80 (£64) or more – a knee-jerk response from traders to the shock attacks and to the many unknowns still surrounding the scale of the damage.

When oil trading starts in Asia later on Monday (00:00 GMT), we’ll get our first indication of how markets have digested the scale of the damage and how prices have been affected.

Previous events of a similar nature in recent times, however, have not had a long-term effect on the oil price.

As international energy policy expert Professor Nick Butler explains, “the direct impact of the attacks could be short-lived. The market has adjusted without blinking over the last two years to the loss for political reasons of over two millions barrels a day of production from Venezuela and Iran”.

The worry is, if the attacks stoke broader tensions in the region, then these price rises could be more long-term.

Professor Butler believes “if retaliation becomes a reality, any spike could be sustained feeding the risk of an economic recession”.

For Helima Croft, Global Head of Commodity Strategy at the Royal Bank of Canada, these drone attacks are “a game changer in the escalating Iranian regional stand-off”.

Production facilities, trading routes and pipelines which thread through the region could all be vulnerable to future attacks.

It is far too early to tell whether consumers will see any financial impact from a rising oil price.

In the short term, much depends on how long a spike lasts – and any rise would take weeks to feed through into petrol prices.

For now, investors are closely watching for more statements from Aramco and for any political reaction to events.