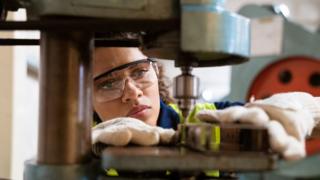 Scottish private sector output grew last month for the first time since August, according to a regular survey.

Service-providing firms reported the fastest expansion for the past six months, outweighing a sharp fall in output from manufacturers.

The overall rise was linked to stronger demand in the latest RBS Purchasing Managers Index (PMI).

RBS said the November data highlighted “some positive signs” for the Scottish private sector, including a “moderate” increase in staffing levels after four months of decline.

Its index – which measures manufacturing and service sector output – posted 50.9 last month, up from 49.6 in October.

Any figure above 50 suggests expansion.

The rise in Scotland was the second-fastest of the 12 monitored UK areas, behind only London.

That said, the increase was relatively “subdued”, with some respondents noting that “continued uncertainty” had weighed on growth.

On a positive note, the November data indicated improved business confidence towards activity over the next 12 months.

“A clearer outlook is required to boost demand and for the Scottish private sector to gain further momentum in the closing stages of the year.”

They showed output (GDP) contracted by 0.2% over that period instead of 0.3% as initially predicted.

Construction saw a sharp reduction in activity, while the service sector grew only slightly.