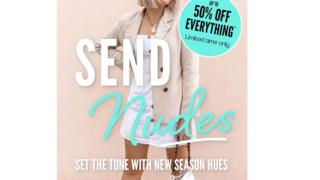 UK fashion company Boohoo has been told one of its emailed advertisements must not use the phrase “Send nudes”.

The company put the phrase in a message sent to promote a range of clothes coloured to resemble skin.

The Advertising Standards Authority (ASA) upheld a complaint about the advert because it made light of a “potentially harmful social trend”.

Boohoo has also been told to make sure its advertising is “socially responsible”.

In its ruling, the ASA said it knew the term “nude” was often used in the fashion world to refer to colours similar to skin tones.

But it said the phrase “Send nudes” was more likely to be interpreted as a harassing request for sexual photos rather than as a reference to a range of clothes.

As well as the words appearing across an image inside the emailed advert, the phrase also formed the message’s subject line.

The ASA said: “Increased pressure to share such photos had been linked to negative outcomes for young people.”

And the market Boohoo targeted probably meant the advert had reached children – especially those who wanted to dress like a “slightly older age group”.

Boohoo said: “We note the ASA’s ruling and recognise our obligations to ensure that advertising is socially responsible.”

In a separate ruling, the ASA banned a video advert for clothing company Missguided, broadcast in June, which “objectified women”.

Missguided said the advert, featuring women assuming a series of seductive poses in swimwear and other summer clothes, served to promote a “particular lifestyle” rather than just clothing.

And the “display of skin was relevant, necessary and unavoidable” given the ad was for beach-wear.

The ASA disagreed and said the images were “highly sexualised” and some of the women depicted in the poses were not wearing the clothes Missguided said it was promoting.

The ad was likely to cause “serious offence” to some people, it said.

Missguided has been told not to run the ad again and must guard against creating similar content that “objectifies women”.