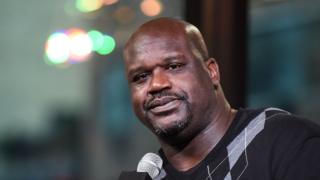 Shaquille O’Neal has spoken out in support of a basketball executive’s comments that sparked a row between the NBA and China.

The NBA is hugely popular in China and Mr Morey’s comments unleashed a wave of anger in the country.

Sponsorship and telecast deals have been cut in the lucrative market.

Speaking on TNT Television’s Inside the NBA show on Tuesday, O’Neal defended the Houston Rockets manager’s tweet that ignited the dispute.

“Daryl Morey was right,” he said.

“Whenever you see something wrong going on anywhere in the world, you should have the right to say ‘That’s not right’ and that’s what he did,” O’Neal said.

Mr Morey tweeted an image earlier this month captioned “Fight For Freedom. Stand With Hong Kong”. He later apologised for the post.

It came in the midst of months of protests in Hong Kong sparked by proposed changes to an extradition bill.

Though the changes have been abandoned, the unrest has continued, expanding into demands for greater democracy.

Right to ‘speak up’

Basketball is among the most popular sports in China with 300 million people playing the game, according to the NBA.

The league has around 800 million fans in the country supporting millions of dollars of business.

NBA hall of famer O’Neal noted the significance of the Chinese market to the US and pointed to “free speech” in his defence of Mr Morey’s comments.

“We as American people do a lot of business in China. And one of our best values here in America is free speech.

“And if people don’t understand that, that’s something that they have to deal with.”

O’Neal is not the first basketball star to speak out on the feud.

Earlier this month the NBA’s best-known player LeBron James weighed in on the row, saying Mr Morey “wasn’t educated” on the situation.