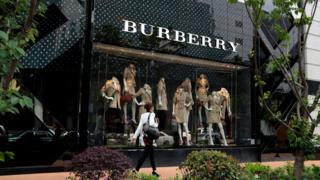 Shares in Burberry have been hit by the worries

Worries over the continued spread of the coronavirus have hit the financial markets, with London’s FTSE 100 share index dropping more than 2%.

Airlines and companies with significant sales in China saw some of the biggest share price falls.

The coronavirus has killed 81 people in China with almost 3,000 confirmed ill, while at least 44 cases have been confirmed abroad.

Among the biggest share price declines was luxury clothes maker Burberry, which fell 5.5%. It makes about 16% of its sales in China, one of its fastest-growing markets, and has warned investors that a drop in Chinese spending could spell a decline in its own revenues.

Shares in InterContinental Hotels Group dropped 4.7%. It says China and Hong Kong are a “growing share of our business” and contributes 8% of the firm’s profit.

British Airways owner IAG, which also contains Iberia, fell 5.6%, while HSBC Holdings, which takes most of its profit from Asia, fell 3.5%.

Shares across Europe saw similar declines, with the German Dax and French Cac 40 indexes both down by about 2%.

Analysts at research firm Bernstein say Chinese consumers had spent $149bn (£114bn) during the Chinese New Year celebrations last year and that will probably be smaller this year due to travel curbs.

Companies in China have advised staff to work from home in an attempt to slow the spread of the deadly coronavirus.

Businesses are also offering workers longer holidays, as well as telling employees returning from the most affected areas to stay away from work.

Janet Mui, global economist at Cazenove Capital, told the BBC’s Today programme that China’s economy could suffer as the outbreak has happened over Chinese New Year, when a lot of shopping is done and gifts exchanged.

“If you look at history the most comparable example would be the Sars episode in 2003,” she said.

China’s annual growth slumped from 11% to 9% in the wake of that outbreak.