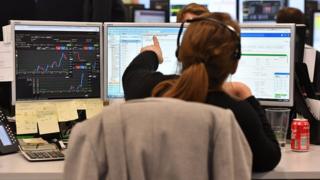 New York’s Dow Jones index is also at a record high after Washington and Beijing agreed on Friday to pause their ongoing trade dispute.

London’s FTSE 100 rose another 2.6% on top of Friday’s gains to reach its highest level in more than four months.

Will Hobbs, chief investment officer for Barclays Investment Solutions, said assets closely related to the outlook for the UK economy “had laboured under a black cloud of UK related political and economic uncertainty for a few years”.

“Following the recent election results, and a clearer path out of the EU in sight, this cloud seems to have dissipated a little. Nonetheless, for the world’s investors, there have been more important developments to digest, namely the progress made towards a phase 1 trade deal between the US and China,” he added.

UK shares surged on Friday after it became clear that Boris Johnson’s Conservative Party would have a decisive parliamentary majority, allowing them to pass legislation and move ahead with the stalled Brexit process.

The prime minister now plans to submit his Withdrawal Agreement Bill to Parliament on Friday.

While many businesses oppose Brexit they have also struggled to plan for the future due to the prolonged period of uncertainty.

Beyond the UK’s domestic climate investors have also been encouraged by the agreement between the US and China which avoided a new round of tariffs being imposed at the weekend.

US and European indexes all traded higher on Monday.

The so-called phase one agreement was agreed on Friday, and includes elements dealing with intellectual property protections, technology, currency and financial services.

Under the deal Phase One trade deal Washington will reduce some tariffs on Chinese imports and China will purchase US agricultural, manufactured and energy products.