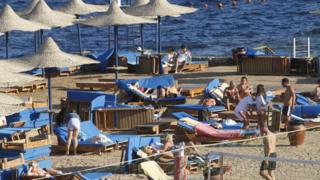 Direct flights from the UK to Sharm el-Sheikh are to resume after the government ended a ban imposed in 2015.

Flights to the Egyptian resort were stopped after 224 people died in the bombing of a Russian airliner, linked to the Islamic State group.

The Department for Transport said there had been improvements in security procedures.

He said: “The safety and security of British nationals remains our top priority and this decision follows close co-operation between our aviation security experts and their Egyptian counterparts, and improvements in security procedures at the airport.”

The Foreign Office and Commonwealth Office has updated its advice, saying it “no longer advises against all but essential travel by air to/from Sharm el-Sheikh”.

However, it says “there remains a heightened risk of terrorism against aviation in Egypt” and additional security measures are in place for flights departing from Egypt to the UK.

EasyJet said it would “look at any opportunities” as a result of the lifting of the flying restriction from the UK.

Trade organisation Abta said the lifting of restrictions was “welcome news” for its members.

“Sharm el-Sheikh has been a very popular destination for UK holidaymakers in the past, before the restrictions were in place,” a spokesman said.

“The news is also positive for the local economy in this region of Egypt that is reliant on the benefits travel and tourism bring.”

UK holidaymakers heading to Sharm el-Sheikh were forced either to take multiple flights or book a place on a ferry from the Red Sea resort of Hurghada.

Earlier this year, the Egyptian ambassador to the UK, Tarek Adel, told the BBC that Egypt had finished working with British security teams to upgrade its airports and was ready to welcome flights again.

After the UK government suspended flights to the Red Sea resort, more than 16,000 Britons stranded in the area were brought home on rescue flights amid increased security.

The Airbus A321, operated by the Russian airline Kogalymavia, was brought down by a bomb on 31 October 2015 in the Sinai peninsula soon after take-off.

Most of the 224 passengers killed on the plane in 2015 were tourists, including 219 Russian citizens, four Ukrainians and one Belarus national. Of the 217 passengers, 17 were children.

UK security service investigators said they suspected someone with access to the aircraft’s baggage compartment inserted an explosive device inside or on top of the luggage just before the plane took off. The Islamic State group claimed it was behind the attack.