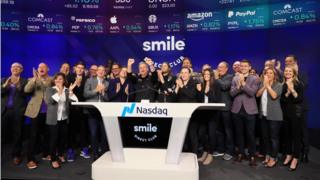 Orthodontics company SmileDirectClub is valued at about $8bn

In the age of the selfie, smiles are paramount. Now American company SmileDirectClub has set out to profit.

SmileDirectClub sells mail-order teeth aligners – a type of clear, plastic braces that the firm has turned into an $8bn (£6.5bn) business.

The company, which debuted on the Nasdaq stock exchange this week, has served more than 700,000 people since its start in 2014.

The firm, which boasts partnerships with major chains such as CVS and Well Pharmacy, remains in expansion mode.

It opened its first offices in the UK this summer, following launches in Canada and Australia. More are in the works.

“This is a very large market that we’re going after,” SmileDirectClub chief financial officer Kyle Wailes told the BBC. “We’ve got many, many countries that are on the roadmap for next year and beyond.”

SmileDirectClub’s flotation this week raised about $1.3bn (£1bn) after its shares fetched $23-a-piece – above the original target. That deal valued the firm at more than $8bn.

But the price sank sharply as public trading began.

Teeth before treatment with SmileDirectClub and after

The company has yet to be profitable, recording a $74.8m loss last year.

It has also come under fire from the medical community, who say the lack of in-person oversight of orthodontic treatment violates local laws and puts users at risk, since moving teeth improperly can lead to changed bites, gum loss and other problems.

SmileDirectClub has vigorously defended its practices and said customers’ treatments are reviewed by licensed professionals. It also reserves the right to turn away people whose teeth might require more serious work.

But the debate about the company has spilled onto YouTube and social media sites, where scores of customers have posted positive and negative reviews.

Gus Burge, a 24-year-old in New York, signed up for the service this summer, and is in week three of his treatment. He said he was lured by the prospect of an affordable fix to the “snaggle teeth” that have bothered him since childhood.

Mr Burge said he had seen the warnings but was undeterred since he was only looking for a minor cosmetic fix.

“I just wanted to straighten it up a little bit,” he said. “It’s not like my teeth were crazy.”

Clear plastic braces have existed for years, but SmileDirectClub bypasses traditional dentists and orthodontists in a move it says makes its services more convenient and affordable.

Customers can create impressions of their mouths at home and mail them to the company or visit one of more than 300 SmileDirectClub stores to have their mouth “scanned”.

The firm then reviews the molds and sends kits with clear, plastic aligners – reviewed by a network of about 240 orthodontists and dentists – which must be worn 22 hours a day. The firm mails new aligners as the teeth shift to the desired position.

“The disruption is the business model and really cutting out supervised dentistry from the mix,” says Chris Salierno, a dentist in New York who lectures on the industry’s economics.

Analysts say the firm, which has recently expanded into other products, has benefited from growing demand for orthodontia, as people put a premium on securing the white, toothy smiles that play well on social media.

And though it might seem like Americans are particularly obsessed with their teeth, it’s unlikely they’re the only ones.

“We think a lot of it is driven by the selfie phenomenon,” says Justin Ishbia, managing partner at Shore Capital Partners, a Chicago-based private equity firm that specialises in health care investments. “This is a trend that is not going away.”

SmileDirectClub’s Mr Wailes dismissed the criticism as gripes by a status quo under threat, saying the firm’s massive, growing customer base “speaks for itself”.

He said investors should be optimistic about the firm’s long-term prospects: “At the end of day people care about their smile, right?”