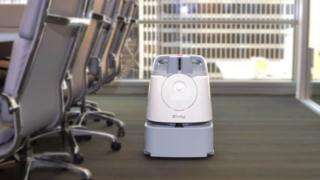 Softbank, the Japanese multinational conglomerate behind WeWork and Uber, has launched an automated vacuum cleaner for the office in the US.

The self-powered machine, dubbed The Whiz, is offered as a subscription service for $499 (£381) a month.

It has been developed by Softbank’s US robotics arm and Hong Kong-based firm Intelligent Cleaning Equipment.

The three-feet-tall (0.9 metres) vacuum was initially only offered for hire in Japan and Hong Kong.

Softbank says its robot is meant to replace “over-worked janitorial teams”, who often only vacuum on dirty patches that are clearly visible.

The Whiz is not initially automatic, as a human has to lead it around until it can learn the cleaning route.

It sends an alert if there is an issue, such as bumping into a wall. After three hours, it can cover 15,000 square feet (1,394 square metres) but then will need a battery change.

It also gathers data and produces a report with analytics on dirt levels.

Softbank says in its presentation materials this provides the ability to “actively demonstrate cleaning efficiency to stakeholders”.

One UK firm told the BBC they were planning to trial the robot in hotels around Southampton.

Ellen Gasson, marketing director for Hampshire-based Industrial Cleaning Equipment (a different business from the Hong Kong company), says when they trial the machine in hotels, a cleaner will need to be present to allow the robot into rooms to clean floors.

Softbank reported a £5bn operating loss for the second quarter of 2019, after companies it invested in, Uber and WeWork, suffered poor financial performances.

WeWork, a flexible office space company had to be given a multi-billion dollar rescue package. Its chief executive Adam Neumann, departed and was replaced with Softbank executives.

Despite the negative recent press, some analysts remain positive on Softbank and see the company’s stock as undervalued.

“The WeWork debacle has eroded investor confidence but we retain our strong conviction regarding the long-term outlook for the company,” said Chris Lane, an analyst at Bernstein in a research note.