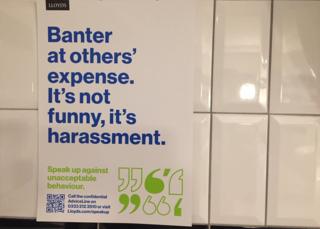 When staff at the Lloyd’s of London insurance market fancy a lunchtime pint, many will head to the nearby pubs off Leadenhall Market such as The Grapes and The New Moon.

But leaving the office behind will be harder this week, after the City institution decided to put posters up in the toilets of those pubs, urging its staff to report instances of sexual harassment they had witnessed.

It is the latest attempt by Lloyd’s to stamp out a culture of sexism and bullying at the market, where 500 members of staff have reported witnessing instances of sexual harassment over the past year.

“Uninvited advances or physical contact. That’s not a joke, that’s harassment,” reads one of the posters, while another warns against abuse masquerading as “banter”.

The firm wants to take its campaign to other pubs around the City, but drinkers at The Grapes had mixed views about it.

One Lloyd’s worker who did not want to be named called it “over the top”, while someone from another insurance firm said that few people would take it seriously.

But a financial consultant drinking outside the pub told me that anything that raises awareness was worth a shot: “You hear a lot of fairly crude sexist talk among groups of mainly younger lads in here… It’s a fairly toxic culture.”

In March the Bloomberg news agency revealed a catalogue of sexual and verbal misconduct claims at Lloyd’s, many fuelled by alcohol abuse. These ranged from verbal abuse to sexual assault, all against women.

Since then the 331-year-old market has been trying to clean up its image as the City’s last bastion of boozy boorishness.

It has turned its on-site bar into a coffee shop and warned that anyone found under the influence of drink or drugs during working hours will be barred from the building. That applies not just to its directly employed staff, but the-near-50,000 pass holders – mainly brokers and insurers – who have access to the building to do business,

Other measures have been brought in too, and Lloyd’s told the BBC that several people had been barred for “inappropriate behaviour”, although it would not comment on individual cases.

The move to target pubs makes sense given the male-dominated insurance industry’s longstanding association with boozy lunches. In a survey of 6,000 workers commissioned by Lloyd’s in September, a quarter said they had observed excessive alcohol consumption at the marketplace over the past year.

At The New Moon a member of the bar staff tells me they never have issues with their regulars (who, of course, include workers not just from Lloyd’s but a range of nearby companies). But a barmaid at a pub nearby says she’s used to men in this part of town making “inappropriate remarks, usually after a lot of drinks”.

“There is a culture of people drinking all day – they start at lunchtime and they’re very polite. But when it gets to 8pm or 9pm they can be rude,” she says.

One of her male colleagues has also witnessed bad behaviour and says he does not think Lloyd’s curbs on daytime drinking have worked.

“In the last six months it has got busier in here. They can’t drink on site so now they come here earlier. Before they would come at 5pm.”

Some at Lloyd’s have complained they are being unfairly maligned and that the issue of sexism goes wider than just one City organisation.

A 35-year-old woman drinking at The Grapes tells me she has worked at the market for 17 years and has never seen any harassment, nor have her friends.

“If there is a real-life allegation that is proven and true, then of course they have to take action. But in terms of putting posters up in the pubs that surround Lloyd’s… maybe they are just protecting themselves in light of the bad press?”

In Lime Street, an older man who has just left the Lloyd’s building tells me that claims of a toxic work culture are “completely overblown”.

“There was very bad behaviour in the 80s. We lived through that, there was a mucky macho culture, no question. But in recent years I can honestly say it’s become so strict in terms of regulatory control, management control, HR, you’d be an absolute idiot to behave like that.”

Lloyd’s boss John Neal is not complacent. He has called the allegations of harassment “devastating”, and is likely to continue putting pressure on the 100 underwriting firms and 300 insurance brokerages based at the market.

Commenting on the new poster campaign – which is also being run inside Lloyd’s offices – he said: “We expect all market participants to act with integrity, be respectful and always speak up. I hope this campaign encourages more people to do so.”