Spending on nights out in UK ‘hits three-year high’ 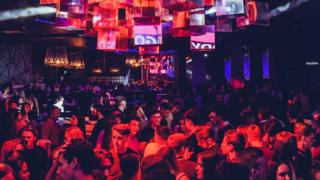 People are spending more on entry fees and alcohol on a night out, the survey claims

Britons are spending more on a night out than at any point in the last three years, a survey suggests.

Club and bar chain Deltic found the average person spent £70.69 on a night out in the three months to September.

That is up 25% on the same period last year and the highest since October 2016 when the survey began.

Deltic surveyed 2,300 people about all sorts of nights out, including trips to the cinema, restaurants, pubs and nightclubs.

The findings come despite signs of a slowdown in Britain’s night time economy linked to weaker spending and people opting to drink less alcohol.

The survey found that during the three months to the end of September, 61% of people went on a night out at least once a week, up from 56.2% last year.

Spending increased on every component of the evening – from drinks at home and transport, to entry fees, food and alcohol bought at venues.

Despite the apparent increase, respondents reported that they are budgeting carefully when they go out.

Nearly a quarter said they refuse to spend more once they have hit their limit. Meanwhile, almost a quarter look for deals and discounts, and many cut down their food and drink costs by eating and drinking before they go out.

But there have been numerous signs that Britain’s night time economy is struggling. According to research from property firm Altus Group, nearly around 12,000 UK pubs shut between 2010 and 2018, although the rate of closure is slowing.

Meanwhile, once-popular restaurant chains such as Jamie’s Italian and Byron Burger have had to announce closures after struggling to pay their rents. Live music venues have been hit too.

Peter Marks, chief executive of Deltic, said: “This quarter’s Deltic Night Index demonstrates that consumers are spending a significant portion of their disposable income on going out.

“However, these aren’t impulse purchases. People are clearly thinking about where and when they spend their money, as shown by the percentage of people that budget, and seek out the best value whilst enjoying a fantastic night out.”