January 11, 2020 by Joshua Marshall No Comments 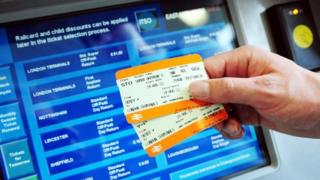 Buying individual tickets for portions of the same journey can work out cheaper, but the practice has previously remained a “niche”.

Travel journalist Simon Calder told BBC News “split ticketing” was not a new concept, but had previously only been carried out by a well-informed group of passengers.

“What we’re seeing now is the whole thing moving from the niche to a company through which millions buy tickets,” he said.

Previously, passengers could use split ticketing websites such as RailEurope’s Pricehack and Split My Fare to check ticket prices.

The ticket companies’ apps are able to find combinations of tickets to save passengers money on most routes across the UK, by automatically splitting the trip into multiple legs.

Passengers buy more than one ticket, rather than a single ticket covering the entire journey.

As long as the train makes a stop at a passenger’s split ticket station along the way, they can be on the same train throughout the whole journey.

To buy a ticket from London Paddington to Bristol Temple Meads without splitting the fare could cost up to £112 on Monday morning.

However, buying one ticket from Paddington to Didcot and another on from there to Bristol would save around one third of the cost of the trip.

Trainline said other examples of potential savings using SplitSave included one of £80.10 between Manchester Piccadilly and London Euston and £79.85 between Edinburgh Waverley and London King’s Cross.

The Rail Delivery Group (RDG), which represents train operators, called for a reform to the whole rail fares structure, describing the split-ticket feature as a “sticking plaster” solution to a “system in need of major surgery”.

Experts say the rules governing how tickets are sold – which date back to 1995 – have not kept pace with technology or how people work and travel.

The rail industry has previously admitted that passengers are not always offered the cheapest fare available due to “long-standing anomalies”.

The RDG published a wish list of reforms last year, including allowing ticket prices to be set more flexibly.

“The railway industry says it has been calling for reform for years and I think [ticket splitting] could accelerate that process,” he said.

“We’re going to see train companies saying to the government: ‘We’re losing all this money, you’ve got to help us sort this out.’

“The simple answer is fares reform.”

Jacqueline Starr, chief operating officer at RDG, said: “We support any effort to improve how people buy tickets within the current fares structure, but ultimately these are only sticking plaster solutions on a system in need of major surgery.

“Reforms proposed by train operators and backed by consumer groups would deliver a better range of fares for everyone, encouraging people to use the network and generating revenue for government to re-invest back in to improvements in services.”

The tool was welcomed by independent watchdog Transport Focus for enabling passengers “to take advantage of cheaper journeys where they are available”.

However, the group’s chief executive, Anthony Smith, added: “Of course, people shouldn’t need tips and tricks to know they are getting the best deal and so we want to see major fares and ticketing reforms coming out of the forthcoming Williams review.”