Sports Direct calls for probe into Nike and Adidas dominance 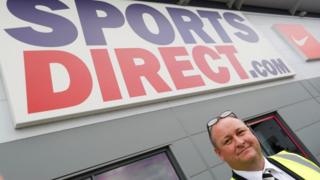 Mike Ashley’s Sports Direct has called for an investigation into the sportswear industry, complaining about the dominance and Adidas and Nike.

The firm said the “must-have” brands hold a bargaining position which allows them to both control supply and the price of their products.

Adidas has blocked the company from selling some of its products, Sports Direct said in a statement.

It follows reports that Nike is ending supply deals with several retailers.

“Sports Direct believes that the industry as a whole would benefit from a wide market review by the appropriate authorities in both the UK and Europe,” it said in a statement.

“The sports industry has long been dominated by the “must-have” brands such as Adidas. These “must have” brands hold an extremely strong bargaining position vis-à-vis the retailers within their supply networks and use their market power to implement market wide practices aimed at controlling the supply and, ultimately, the pricing of their products,” Sports Direct said.

Mr Ashley’s grievance stretches as far back as 2013 when the German giant withdrew replica Chelsea shirts from Sports Direct stores. The retailer said the dominance of Nike and Adidas allows them to “[refuse] to supply key products… with no apparent justification”.

The Sunday Times disclosed that Nike had told several independent retailers it will pull its products from their stores. It is part of a move by the US giant to reduce the number of retailers it uses and push customers towards its website, the newspaper said.

“All those companies that built a business on the back of Nike and Adidas are toast – there’s no way they can replace that [business],” a source told the Sunday Times.

In the past, Adidas and Nike have preferred to work with JD Sports but Sports Direct has attempted to make inroads, appointing former Nike executive David Daly as chairman of the its board.

“Sports Direct has consistently aimed to provide the widest range of products at attractive prices and will continue to work constructively with all its suppliers to enhance its product offering for the benefit of consumers,” the company said.