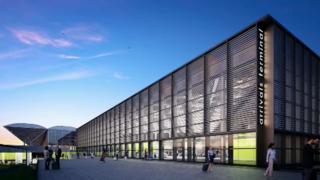 An artist’s impression of the new arrivals terminal, which was put on hold

Expansion plans for Stansted Airport are a step closer to lift off after it outlined £35m of investments for the local community.

Officers at Uttlesford District Council have recommended proposals to increase its passenger cap to 43 million a year are approved later this month.

But opponents told the Local Democracy Reporting Service it was only “an officer recommendation”.

Much of the investment will go on sound insulation for homes, and transport.

Originally the council approved the Essex airport’s bid to increase its passenger numbers, but after the Residents for Uttlesford group took control of the council from the Conservatives, the decision was referred back to the planning committee.

Council officers are recommending Stansted’s financial offer should be accepted when the council meets on 17 and 24 January.

They said there were no new material considerations to justify a different decision from the one made in November 2018.

Stansted currently handles 28 million passengers a year, and already has permission to increase capacity to 35 million.

However Brian Ross, from Stop Stansted Expansion, cautioned against making early predictions when the decision will ultimately be made by elected councillors.

He said: “This is an officer recommendation. It is important to make that distinction.”

As part of the offer, up to £19.2m could be spent on community projects including sound insulation and homeowner relocation, as well as more than £15m for transport projects including work on junction 8 on the M11, which serves the airport.

Stansted chief executive Ken O’Toole said: “We have listened to the community from the outset and remain absolutely committed to delivering additional passenger growth in a sustainable manner, without an increase in the number of permitted flights and within a smaller noise footprint than our existing permission requires.”

Plans for a new £150m arrivals terminal were put on hold last year. The project was meant to have been completed this year as part of a £600m plan to increase capacity and facilities.