Star Wars: The life of a props trainee on set 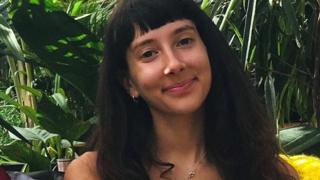 Hanna Brar says her work is “super intense, but I love it”

“One of the wackiest things I made at work would definitely be a ‘space donut’. They were like normal donuts, but looked a bit more futuristic!”

Hanna Brar, a 24-year-old props assistant from Norwich, has only been working in the film industry for four years. But she already has some blockbusters under her belt.

She started out on Solo: A Star Wars Story as a trainee, and has since worked on Star Wars: The Rise of Skywalker as well as Disney’s upcoming Cruella de Vil movie starring Emma Stone.

“One day to the other, the work is so varied. In the latest Star Wars film, I could be doing anything from creating weapons or armour, to ageing different props.

“Sometimes, you’d be on the stages in the studios actually building the sets. It’s super intense, but I love it.”

If you fancy creating droid “body parts” like Hanna, a props traineeship could be for you

Hanna adds: “Seeing something that you’ve created being used by one of the main characters on screen, as the main focus of the cinematography, it’s incredible.”

Hanna’s film career started out through the British Film Institute’s (BFI) Film Academy’s traineeship in partnership with Lucasfilm. She says she also considered working in costuming, but decided against it.

“I wanted to prove people wrong and show them that I don’t have to be a big, stocky guy to work in props.

“It’s often a male-dominated part of the industry, but I knew I wanted to be a part of it and create things from scratch.”

Hanna is just one of the growing number of employees working in film.

Record investment for film and TV

New statistics from the BFI also show that more was spent in 2019 on UK film and “high-end” TV production than in any other year since reports began in 1994.

Most of this spending (72%) came from big, US-backed pictures.

Although the total number of UK cinema admissions fell slightly by 0.6% to 176 million last year, this was still the second highest level seen since 1970.

UK audiences were drawn in by superhero films, sequels and animated features, mainly distributed by Disney.

Recent data from the Office for National Statistics also shows that the increasing value of the film, music production and TV industry has been a boost to the wider UK economy.

It now accounts for just under 1% of the total services sector.

Although more money might have been spent making films in the UK in recent years, breaking into film can still prove difficult.

Hanna said: “If you’re starting out in the industry, it can be really competitive.

“You can easily be replaced, so you have to show that you’re eager to work there.”

The charity Education and Employers recently warned that there were not enough jobs available in the arts or media for the number of young people who want to do them.

Its report suggested that five times as many 17 and 18-year-olds in the UK want to work in arts, culture, entertainment and sport as there are jobs.

The charity said that many could be “destined for disappointment”.

But for those keen on working on or off-screen, Hanna has some words of advice:

“Take your time to figure out which department you might suit best.

“And remember, if you don’t like what you’re doing, you can always change it. It’s all about what you make of it!”