Starter homes pledged by government in 2014, but none built, says watchdog 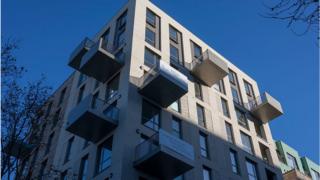 A government plan to create 200,000 new homes for first-time buyers has resulted in no homes being built, the National Audit Office has found.

But legislation to take the project forward was never passed.

Labour called the policy a total failure, but the government said it had a “great track record” for house building.

Former prime minister David Cameron committed to the scheme in the 2015 Conservative Party manifesto as a way of tackling the affordable housing crisis.

The project was also supposed to support the wider growth and regeneration of local areas, and some town centres.

The homes were meant to be built across the country by the end of the decade and more than £2bn was set aside for the first tranche of 60,000 dwellings.

According to the National Audit Office (NAO), between 2015-16 and 2017-18, the Ministry of Housing, Communities and Local Government (MHCLG) spent almost £174m on acquiring and preparing sites originally intended for building starter homes.

These were in places such as Plymouth, Bury, Basildon, Stockport, Bridgwater, Cinderford and Bristol.

But the spending watchdog said the sites were all now being used for housing more generally, only some of which was affordable.

It said the scheme had faltered because the necessary legislation and planning guidance had never been put through Parliament, despite expectations it would happen in 2019.

As a result, even new homes conforming to the intended specifications cannot be marketed as starter homes, which has made getting developers on board challenging.

The NAO said the government also no longer had a budget dedicated to the starter homes project.

Labour MP Meg Hillier, chairwoman of the Public Accounts Committee, said: “Despite setting aside over £2bn to build 60,000 new starter homes, none were built.

“Since 2010 many housing programmes announced with much fanfare have fallen away with money then recycled into the next announcement.

“The MHCLG needs to focus on delivery and not raise, and then dash, people’s expectations.”

“After nearly 10 years of Conservative failure on housing, the country needs a Labour government to fix the housing crisis.”

But a housing ministry spokeswoman said house building was at its highest level for all but one of the last 30 years.

David O’Leary, policy director at Home Builders Federation, said that even though starter homes had not got off the ground, the scheme had not been a total failure.

He said the engagement it had generated between local government, builders, mortgage lenders and valuers was positive.

“The difficulty in creating a workable set of rules demonstrates the importance of ensuring that proper consideration is given to the practical implementation of interventions and their market impacts as early as possible.”